There are very few films that one never gets tired of multiple viewing and "Rashomon" is one. The film won the Golden Lion at the Venice Film Festival and also received an Academy Honorary Award at the 24th Academy Awards.The film is loosely  based on two stories by Akutagawa – “Rashomon" and ‘In a Grove”  .

Kurosawa brilliantly  explores the ambiguous nature of truth, reality, honor, and human nature like no other filmmaker. Varied aspects such as innovative techniques,  humanistic insight, originality, layered narrative, unusual characterizations, open-ended conclusions,  the power and sheer beauty of  images and poetic sensibility  elevate this film as one of the groundbreaking ones in the history of cinema.

Set in 12th Century Japan, the film’s premise is at once both very simple and very complex. A man is found dead in a forest, and several people are brought forward to give testimony in the matter. In some respects their accounts agree - but in numerous others, some obvious and some very subtle, their stories differ. As each character gives his or her version of events, the various differences pile higher and higher, leaving the viewer to wonder at the motivations involved. 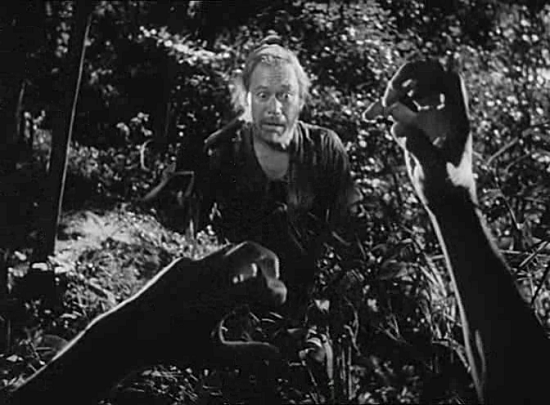 The woodcutter (Takshi Shimura) discovering the body of murdered Samurai

Has each person simply interpreted the same facts in different ways? Do they deliberately lie in order to protect themselves? Are the differences in their stories deliberate or subconscious? The film offers no easy answers. Some have criticized the film for seeming to state that there is no such thing as ultimate truth, but Rashomon is more complex than this: it is essentially a meditation on our inability, be it deliberate or unintentional, to reach more than an approximation of ultimate truth due to the very nature of humanity itself. 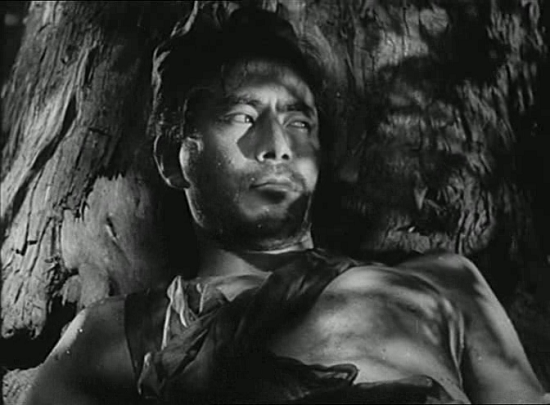 Tajomaru, the bandit (Toshiro Mifune) observing Samurai and his wife

The film opens with a priest, a woodcutter, and a peasant taking refuge from a downpour beneath a ruined gate in 12th-century Japan. The priest and the woodcutter, each looking stricken, discuss the trial of a notorious bandit for rape and murder. As the retelling of the trial unfolds, the participants in the crime - the bandit (Toshiro Mifune), the rape victim (Machiko Kyo), and the murdered man (Masayuki Mori) - tell their plausible though completely incompatible versions of the story. In the bandit’s version, he and the man wage a spirited duel after the rape, resulting in the man’s death. In the woman’s testimony, she is spurned by her husband after being raped. Hysterical with grief, she kills him. In the man’s version, speaking through the lips of a medium, the bandit beseeches the woman after the rape to go away with him. She insists that the bandit kill her husband first, which angers the bandit. He spurns her and leaves. The man kills himself. Seized with guilt, the woodcutter admits to the shocked priest and the commoner that he too witnessed the crime. His version is equally feasible, although his veracity is questioned when it is revealed that he stole a dagger from the crime scene. Just as all seems bleak and hopeless, a baby appears behind the gate. The commoner seizes the moment and steals the child’s clothes, while the woodcutter redeems himself and humanity in the eyes of the troubled priest, by adopting the infant. 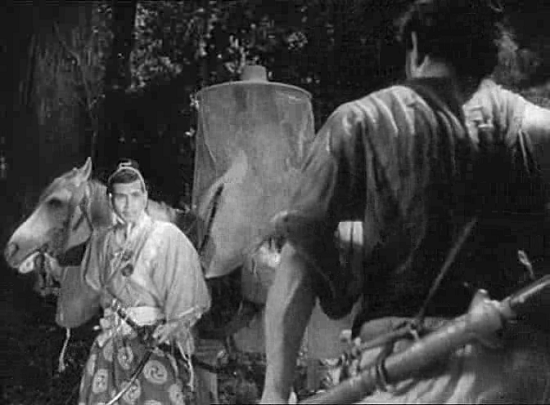 The samurai and his wife spot the Bandit

From its opening sequence at a ruined temple, to the last shot revealing both the temple’s and the movie’s name, this Kurosawa film is a masterpiece of the silent language of images. A great film is more than the sum of its parts, but ultimately the history of film bestows a special favor on the role of Image in conveying the medium’s message. Film is an image oriented art form, although, like Opera, the success of a particular movie depends on several elements. The greatest compliment is that the subtitles, and indeed, the dialogue itself, are not entirely necessary to experience the full power of this film. Nothing could be truer about this film. 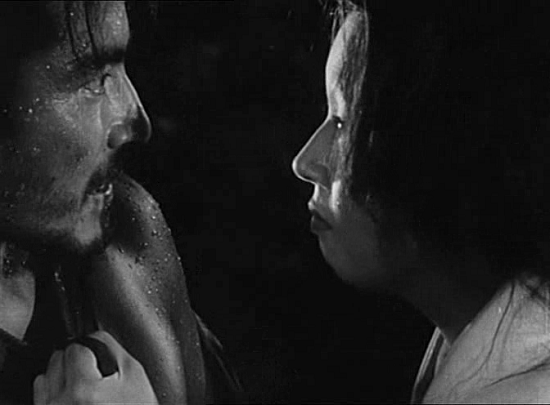 Samurai’s wife confronting the Bandit after the rape

Whether it is the wind blowing aside the veil of a beautiful woman, a revelation which initiates a robber’s violence upon her; whether it is the radiance of the sun reflecting on her face, or the bestial, mute struggle between the woman’s samurai husband and the robber, or even the picture of three silent, despairing men who cannot understand the irrationality of human suffering - this film’s images speak far louder than its words. It presents the forest as a living, breathing entity. The images communicate beyond time and space, and attain to a beauty that transcends culture, a beauty that sees “into the life of things” and speaks in way that the terse (and often incomplete) subtitles clearly fails to do. This is pure cinema.

Rashomon is like a vast distorting mirror, or better, a collection of prisms which reflect and refract truth. By showing us its various interpretations (perhaps the husband really loved his wife, was lost without her and hence felt he must kill himself; perhaps she really thought to save her husband by a show of affection for the bandit, and thus played the role of faithful wife; perhaps the woodcutter knows much more, perhaps he too entered the action- mirrors within mirrors, each intention bringing forth another, until the triangle fades into the distance ) he has shown first, that human beings are incapable of judging reality, much less truth , and second, that they must continually deceive themselves if they are to remain true to the ideas of themselves that they have.

Hence then, more than in any other single film, is found Kurosawa’s central theme; the world is illusion, you yourself make reality, but this reality undoes you if you submit to being limited by what you made. The most important corollary-you are not, however, truly subject to this reality, you can break free from it, can live even close to the nature you are continually creating. 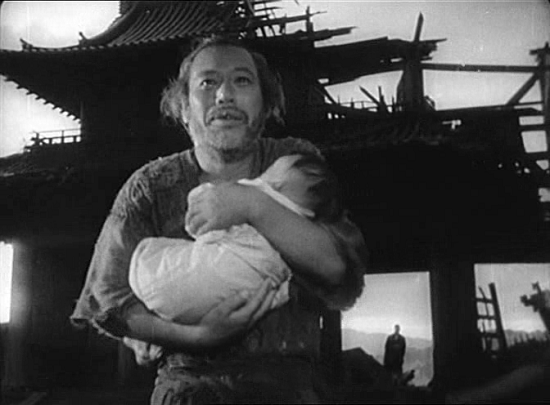 The woodcutter leaving the Rashomon gate with the baby

Rashomon was a favorite of the German film director Werner Herzog and he said - “It is probably the only film that I’ve ever seen which has something like a perfect balance, which does not occur in filmmaking very often. You sense it sometimes in great music, but I haven’t experienced it in cinema, and it’s mind boggling. I don’t know how Kurosawa did it. It’s still a mystery to me. That’s greatness.”