This is an undisputed masterpiece of Herzog and the film had influence on several Hollywood film directors such as Francis Coppola and Terrence Malick. The most famed and well-regarded collaboration between New German Cinema director Werner Herzog and his frequent leading man, Klaus Kinski, this epic historical drama was legendary for the arduousness of its on-location filming and the convincing zealous obsession employed by Kinski in playing the title role.

As a last-ditch effort to locate treasure, Pizarro orders a party to scout ahead for signs of El Dorado, the fabled seven cities of gold. In command are a trio of nobles, Pedro de Ursua (Ruy Guerra), Fernando de Guzman (Peter Berling), and Lope de Aguirre (Klaus Kinski). 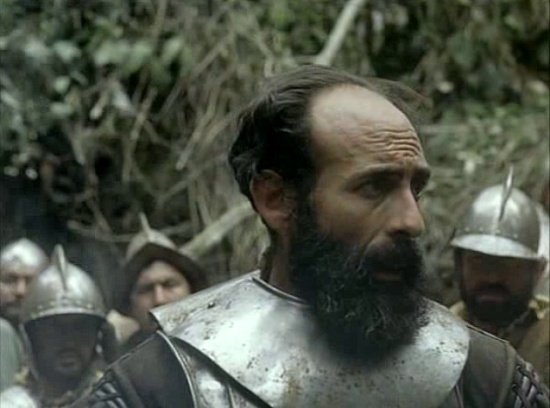 The story narrates 1650-51 expedition of Spanish conquistador, with Pizarro (Alejandro Repulles) and his army of Spanish conquistadors traversing the Andes and impenetrable jungles of Peru in search of wealth, as in the wake of the conquest of the Incas some years before, the Indians began circulating stories of the legendary City of El Dorado, which purportedly held riches beyond measure. When they reach an impasse, however, Pizarro commands forty men to continue on down the river by raft, to seek out any Christian civilization that may be of help or able to lead them to their destination. He places Don Pedro de Ursua (Ruy Guerra) in charge, with Don Lope de Aguirre (Klaus Kinski) as his second in command, giving them one week, after which time if they have not returned, Pizarro and the rest will go back the way they came. Among the forty chosen to go on, are Ursua's wife, Inez (Helena Rojo), and Aguirre's fifteen-year-old daughter, Flores (Cecilia Rivera). But when this leg of the expedition goes awry as well, Ursua issues orders that they are to return to Pizarro; Aguirre takes exception to this, however, and rallies the men against Ursua, telling them to consider Cortes, who disobeyed when ordered back, and then went on to conquer Mexico. What the men do not realize at the time, is that Aguirre is a delusional madman with an agenda of his own, that actually has little to do with the acquisition of wealth, but everything to do with what he perceives to be his destiny as the "Wrath of God." 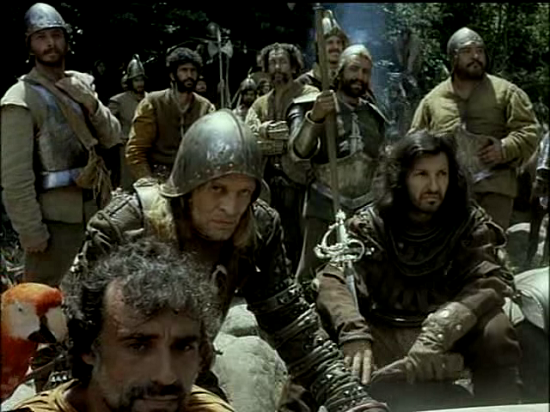 Aguirre and the first in Command Don Pedro de Ursua

Traveling by river raft, the explorers are besieged by hostile natives, disease, starvation and treacherous waters. Crazed with greed and mad with power, Aguirre takes over the enterprise, slaughtering any that oppose him. Nature and Aguirre's own unquenchable thirst for glory ultimately render him insane, in charge of nothing but a raft of corpses and chattering monkeys. This film is based on the real-life journals of a priest, Brother Gaspar de Carvajal (played in the film by Del Negro), who accompanied Pizarro on his ill-fated mission. 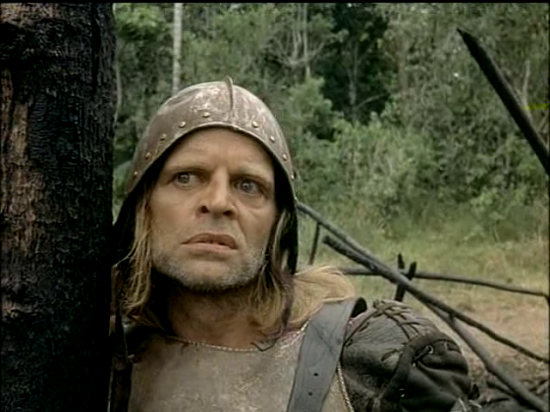 Herzog has crafted an absolutely mesmerizing film that is innovative and transporting. He permeates the story with a hypnotic, ethereal atmosphere that draws you into this world, and allows you to experience the hardships of the river and the nearly insurmountable obstacles of the Peruvian Rain Forests and the mountains. He creates that sense of being in a dream, where nothing is real, all of which is enhanced by the deliberate pace Herzog sets, as well as the haunting music score that intensifies Aguirre's descent into madness. 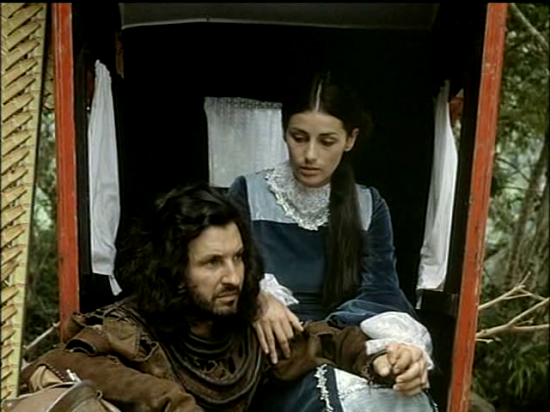 There are a number of truly memorable scenes, the most brilliant of which frame the story: The opening takes you along with Pizarro and his men as they negotiate the treacherous mountain paths, plodding slowly through mud and mist against all odds. It's an extended scene that allows the viewer to assimilate the full import of what is transpiring, and with it, Herzog is letting you know what to expect from the rest of the film. It's a breathtaking beginning, rivaled only by the final scene, in which the camera endlessly circles Aguirre as he stands alone on a raft in the middle of the river, expounding his delusions of claiming lands and the conquests that lie ahead still, surrounded by scampering monkeys and an aura of doom. 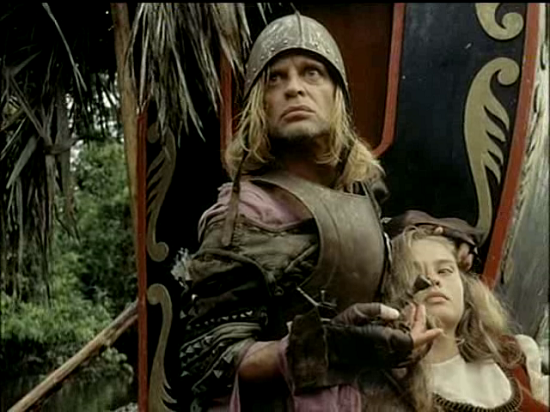 Aguirre beside his dead daughter

Kinski, with his natural, haunted expression and the chilling depth of his eyes, is perfectly cast as Aguirre. He captures the very essence of a man whose soul is damned, yet remains adamant in his quest to fulfill what he deems to be his own destiny. Cloaked in armor, his long hair straggling out from beneath his helmet, he exhibits a singular countenance, infused with menace and an attitude of invincibility. It's a powerful performance that underscores the impact of the contrast between the strength of his misguided and paranoid character, and the folly of his actions. That he is unbalanced is obvious fairly early on in the film, and because of that, coupled with his determination, we are quickly able to discern the probable outcome of the story. And it's disturbing, watching and knowing the fate that awaits these people with whom you've become involved, while at the same time, you're somewhat numbed to it all by the wistful state of being into which you have been so subtly lulled by Herzog along the way.

"Aguirre, The Wrath of God" is intense in many respects. Herzog has created a film that feels unbearably realistic as he records his cast wandering around dazed and lost, sometimes looking directly at the camera in total despair. The soundtrack music, haunting electronic soundscapes by Popol Vuh, is kept to a minimum, and Herzog accentuates the tension by concentrating on the sinister quietness of the river and hazardous jungle. 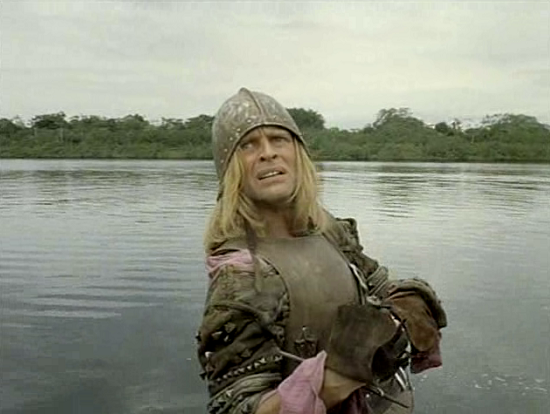 A desolate Aguirre standing alone on his raft

It is also interesting to note that Kinski’s crazed performance bore similarities to the real Aguirre. A “true homicidal megalomaniac”, many of his fellow soldiers considered his actions to be that of a madman. Kinski’s use of a limp reflected one that Aguirre actually had, the result of a battle injury. Aguirre’s frequent short but impassioned speeches to his men in the film were accurately based on the man’s noted “simple but effective rhetorical ability.”