Wages of Fear ranks among the finest pieces of suspense films in world cinema. This tight, 131 minute, black and white thriller, co-written and directed by the cunning Georges Clouzot is indeed a cerebral, tense and gritty suspensor that took home the Grand Prize at the 1953 Cannes Film Festival, and won a British Best Film Oscar.

Henri-Georges Clouzot tells in “The Wages of Fear” the story of four strange men-four lonely men and their intertwined fate. Not friends as much as comrades, not comrades as much as fellow slaves, not slaves as much as desperados, they have been selected to face peril for a high reward by the Southern Oil Company (a handy sobriquet for the Standard Oil Company of New York), which has an oil operation going in the wild mountains of Mexico, where has erupted a wildcat fire. Needed is a massive shipment of nitroglycerine – two truckloads full, so that one truckload can act as security against the hazardous loss of the second – an exceptionally volatile and syrupy liquid that can be used to produce the explosion that will bring tranquility again. 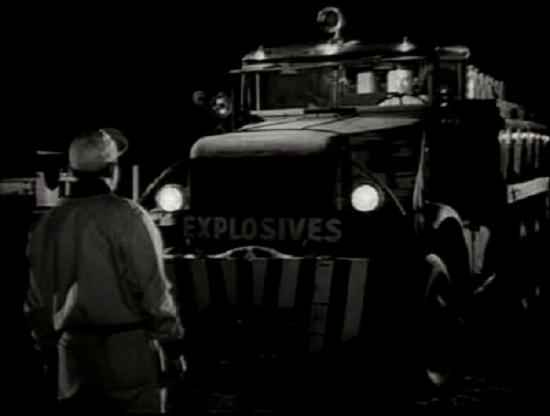 The journey flags off: Mario in command

The four men selected for the mission to transport Nitroglycerine are the Frenchmen Mario and Jo (a substitute at the last minute), Dutch Bimba and Italian Luigi. Mario is a sarcastic Corsican playboy, who treats his devoted lover, Linda, with disdain. Jo is an aging ex-gangster who just recently found himself stranded in the town. Bimba is an intense, quiet individual whose father was murdered by the Nazis, and who himself worked for three years in a salt mine. Luigi, Mario's roommate, is a jovial, hardworking individual, who has just learned that he is dying from cement dust in his lungs. Mario befriends Jo due to their common background of having lived in Paris, but a rift develops between Jo and the other cantina regulars because of his combative, arrogant personality.

Jo and Mario transport the nitroglycerin in one vehicle; Luigi and Bimba in the other, with thirty minutes separating them in order to limit potential casualties. The drivers are forced to deal with a series of physical and mental obstacles, including a stretch of extremely rough road called "the washboard", a construction barricade that forces them to teeter around a rotten platform above a precipice, and a boulder blocking the road. Jo finds that his nerves are not what they used to be, and the others confront Jo about his increasing cowardice. 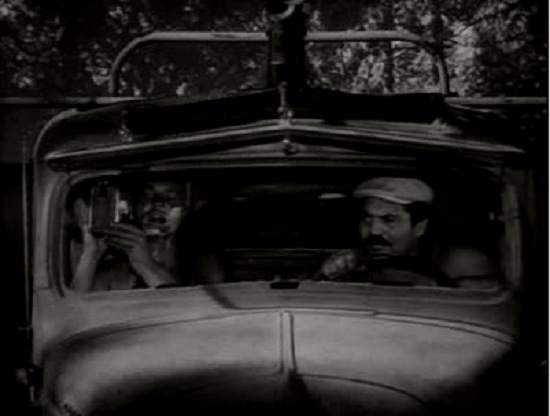 There are many uphill tasks along the journey. Having negotiated long stretches of the taxing route, and mastered a perilous hundred-and-eighty-degree turn – to accomplish which they had to back the heavy truck off the road onto a rotting cantilevered wooden platform – Luigi and Bimba are suddenly confronted by a massive boulder blocking their way. On Bimba’s command, and hesitant, even recalcitrant, Luigi takes a crowbar to make a three-foot-long channel in the top of it, while Bimba fetches the nitro and transfers some to his thermos. Luigi finished, Bimba strips a palm frond, and then slowly, drop by drop, pours a small quantity of the extremely viscous explosive down the stem and into the hole. He rigs a sledgehammer on a metal tripod and fuses it, sending his partner, and the other two drivers (who have come up behind) to back up the trucks and protect themselves. He lights the fuse. The explosion devastates the boulder, but also sends a myriad smaller stones racing down the hillside and all of the men must hold their breaths for fear the truckloads of nitro will be set off. Finally there is silence, blissful silence. Bimba and Luigi drive on, Bimba now rather cavalierly lathering his face and shaving with the help of a piece of polished metal suspended from his visor. Jo and Mario keep happily to the rear, permit the first truck to disappear. At the wheel, Mario is nibbling a sandwich. Beside him, Jo is daydreaming about having a drink in a Paris bistro, and rolling himself a smoke. The film is filled in general with “explosive” moments such as these that create entertaining and captivating moments in an otherwise tense filled tale. 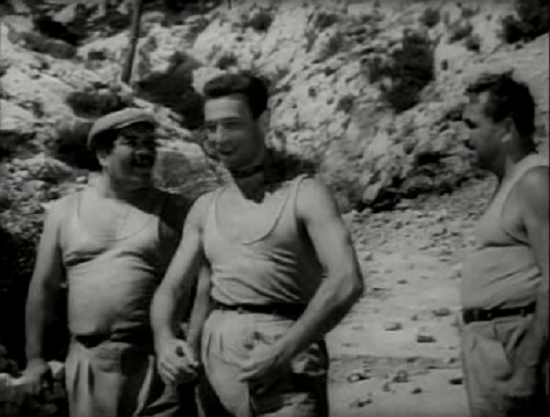 Luigi , Mario and Jo - A relaxing moment after overcoming an obstacle

The last half, a desperate attempt at a kind of escape, is a suspenseful masterpiece. It's a stark look at human politics, opportunism and greed, and the characters don't do well. Even so, when pushed beyond endurance the pessimism lets up briefly: even the most ignoble deserve compassion, even some admiration. Once the struggle is over, the instinct is satisfied for that something redeeming - as in The Treasure of the Sierra Madre - although it's fleeting. 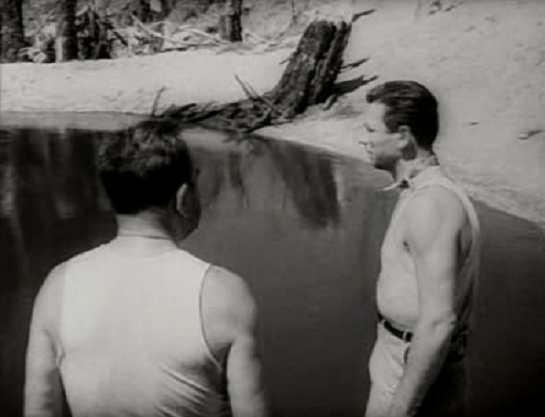 Jo and Mario look at the oil crater

We virtually squint at the scorching black-and-white cinematography by Armand Thirard, and breathe through a pace that is at first languid and soporific, then suddenly charged by urgency, and finally, for a very long time indeed, inexorable in its pressing slowness. 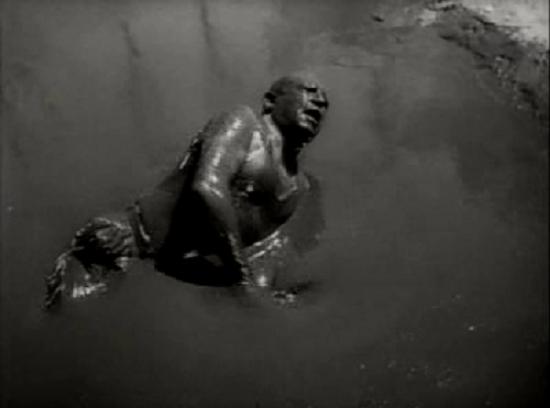 “Wages of Fear” is the grandfather of “slow cinema”, a film in which each grinding shift of a gear, each spin of a truck’s wheel in mud or oil, the striking of a match against a cigarette pack, the strain of a man’s neck muscles to contain himself, the lifting of a tire over stones on a bleached stone-littered road tossed randomly with saguaro and high-tension lines and soft dust, carries us simultaneously closer to the SOC oilfields, which linger at an unfathomable distance across the sun-dried hills and further from safety, safety which qualified that zone in which one likes to imagine one lived before entering upon this voyage to hell. 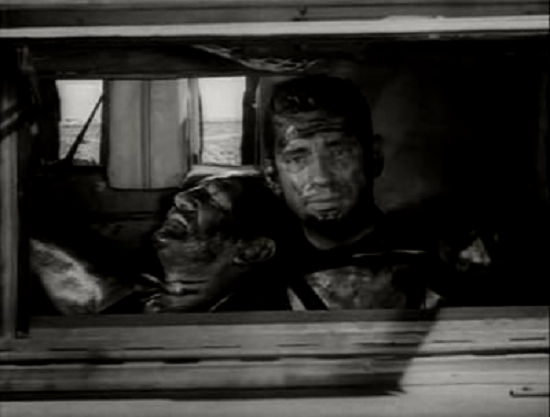 The last lap of the journey: A collapsed Jo and Mario

The characters are universal, as is the dialogue: not only in French and Italian, but German, Spanish (Mexican-scripted but uttered with a Brazilian-Portuguese sibilance), and English (both British and American). It is surely among the most polyglot movies, although it never seems artificial or showy. 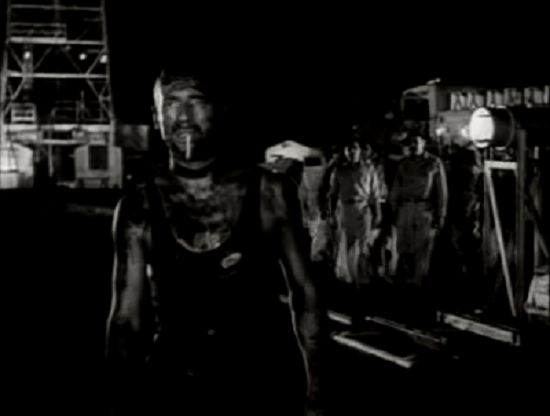 Clouzot has given us a powerful, character-driven action film in “Wages of Fear”. Acting and photography are stripped down to the basics; still, a viewer can feel the heat and humidity of the jungle and the dangers of the road. Moreover, although some modern viewers might find it a little slow, once those trucks get going, they hardly stop. The film's minimal score, which contributes to the mood, was written by Georges Auric.

“Wages of Fear” is a riveting film, an intense psychological drama and a relentless, goose bump-inducing assault on the audience's senses.