Coup de Grâce is an unforgettable masterwork of by the German director Volker Schlöndorff (“Tin Drum”). It is based on a novel by the great French Novelist Marguerite Yourcenar bearing the same title which in French means "Finishing Blow". Passion and politics collide with tragically bleak results in Le Coup de Grace.

The events of the novel are seen from the point-of-view of the soldier Erich von Lhomond. However, the main character of the film is Sophie de Reval, played by Margarethe von Trotta, who also co-wrote the screenplay. The filmmakers felt that an audience of 1976 would more readily identify with the independence and resolve exhibited by Sophie than with Erich's repressed conservatism. In addition, the Russian Civil War is only a vague backdrop in the novel, but the film depicts battlefield engagements with a brutal reality that makes the war a significant presence. 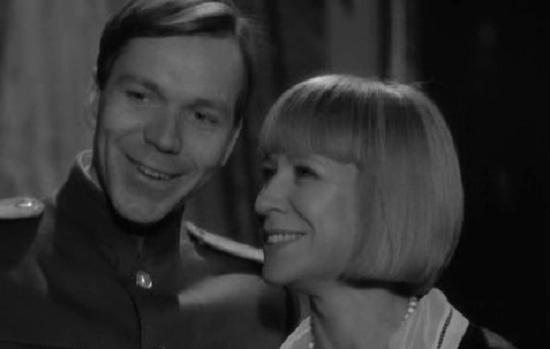 The Baltic States, 1919: A civil war divides the country. Sophie (Margarethe von Trotta), a woman in her late 20s, is living in the Baltic castle Kratovice. Sophie's brother Konrad (Rüdiger Kirschstein) and his friend Erich von Lhomond (Matthias Habich) arrive with a horde of volunteers of various nationalities who invade Kratovice like an occupation army. Sophie falls in love with the Prussian officer Erich von Lhomond, who has hired himself out as a mercenary soldier to "defend the Western World against the Bolsheviks". She is not afraid of openly admitting her love to him. The legionnaire shrinks away from such an ostentatious confession of love. With her ego humiliated and her honesty deceived, she begins to randomly choose lovers amongst the officers: a game that Erich von Lhomond heartbrokenly observes. Lhomond completely devotes himself to the most unimportant, meaningless military actions. Sophie ultimately abandons the castle and defects to the rebels. The film has an unusual ending that haunts us. 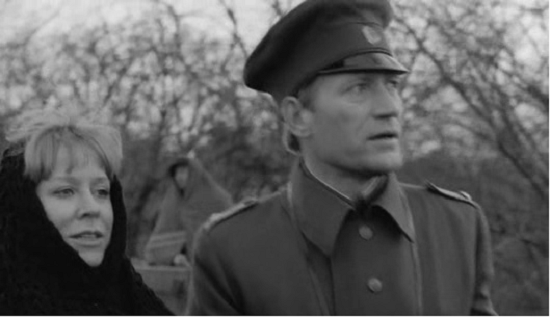 Coup de Grâce places the reader or viewer in conditions of near-civil war that raged in the Baltic provinces near Riga in the early twenties. Radical Bolsheviks, Estonian and Latvian nationalists, German junkers, and White Russians, as well as fortune hunters and volunteer militias, attack each other. One reactionary stronghold is the castle Kratovice, ancestral home of Konrad von Reval (Rüdiger Kirschstein), who returns as an officer and finds his sister Sophie (Margarethe von Trotta). She falls in love with his comrade Erich von Lhomond (Matthias Habich), also a childhood friend, from whose masculine point of view Yourcenar’s novel is written. She politically sympathizes with village Bolsheviks, but when Erich does not return her love, she moves to the communist camp. 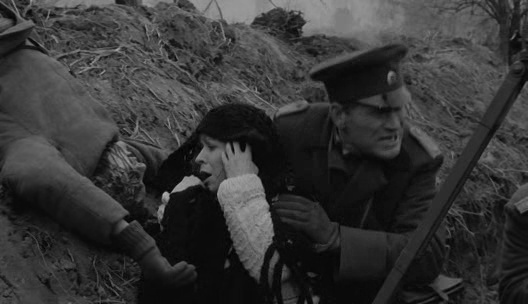 Fighting from a Trench: Sophie with Erich von Lhomond

As mentioned earlier, Schlöndorff has, in fact, reconfigured the point of view within the narrative situation: Sophie turns into Erich’s co-protagonist. This change proves useful to Schlöndorff’s personal set of themes, since instead of an officer and his memories, a woman moves to the forefront along with the conflicts of her emotions, her epoch, and her environment. In the adaptation process, Schlöndorff has set up an unusual narrative structure. On one hand, he is taking a book that features a male point of view and evokes the genre of the war film––a genre usually characterized by a male point of view. On the other hand, the shift away from a first-person male narrator represents here a subverting of the war film’s usual masculine perspective. 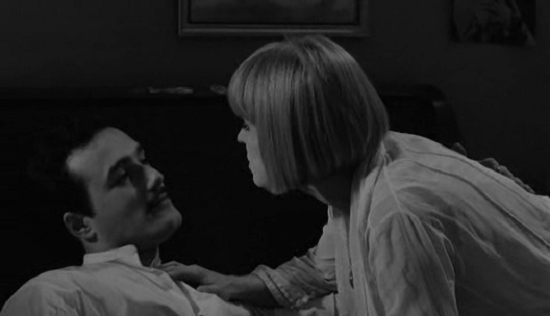 Schlöndorff’s film develops its love-story narrative in parallel to its war-film narrative. In Coup de Grâce, Sophie’s intertwined expectations for meaningful relationships, personal happiness, and sexual fulfillment are at odds with the largely male-created universe of militarism. Schlöndorff creates a world of intimacy without sex, of sex without intimacy, and of both without happiness. In terms of film genre, the movie asks whether the traditionally configured love story can survive if the woman seeks to be the man’s equal and strives to propagate values counter to repressive masculine ones. Sophie is open, while Erich clings to orthodox formalities and appearances. She is self-disclosing, Erich evasive and even duplicitous. We are never sure whether his feelings for the contessa are sexual, fraternal, or controlling paternalistic. This ambiguity throws audience identification onto the side of Sophie. 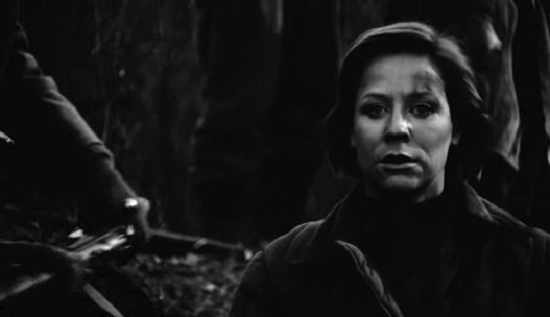 There is much to relish in this fine film, maybe the director's finest. The cinematography is of the very highest order. There is the rich and beautiful black and white compositions that invest every frame with considerable aesthetic power. There are fine performances from all - grave diggers, porters, villagers, revolutionaries, aristocrats. Margarethe von Trotta's deeply nuanced performance as the multi-faceted (victimized, hysterical, needy, seductive, vengeful, idealistic, reckless, nihilistic and resigned.) Sophie is unforgettable. 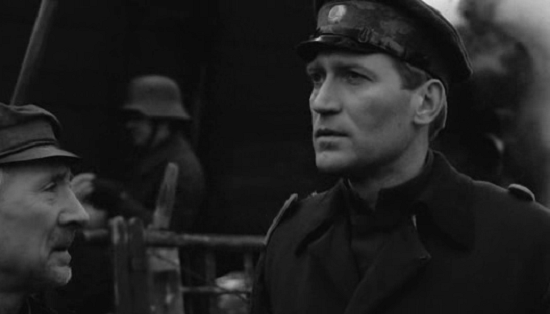 There is stunning direction - one instance is the scene where military officer Erich - the object of desire of Sophie - enters her bedroom with her at her dressing table only to find younger military officer Plessen standing at her bedside about to light a cigarette. We know from a previous scene, that Sophie prefers to makeup her face after lovemaking and it is almost a cinematic convention of old that lovers light up post coitus. Plessen offers Erich a cigarette, just like the gentleman Plessen is, and just like the gentleman Erich is, he takes it. As this business carries on, the camera remains still, Sophie remains still, Plessen and Erich finally stand still - all the while we the audience see the reflection of the bed in the dressing table mirror LOOMING center stage, infesting our minds with the wildest possible imaginings no amount of explicit goings on could replace. Silence is held as tension builds and builds and at the moment perfect Erich turns and exits.