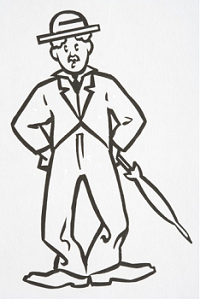 Charlie Chaplin's City Lights is one of the true masterpieces of cinema and shows Chaplin's unique genius as a director. It is Shakespearian in its scope with series of scenes that smack of comedy, tragedy, pathos, absurdist, surrealist and realistic elements.

City Lights is a film to pick for the time capsule, a film that best represents the many aspects of director-writer-star Charlie Chaplin at the peak of his powers: Chaplin the actor, the sentimentalist, the knockabout clown, the ballet dancer, the athlete, the lover, the tragedian, the fool. It's all contained in Chaplin's simple story of a tramp who falls in love with a blind flower girl (Virginia Cherrill) who through a series of coincidences has gotten the impression that the shabby tramp is a millionaire. Chaplin elevates the Victorian contrivances of the plot to something glorious with his inventive use of pantomime and his sure grasp of how the Tramp relates to the audience. 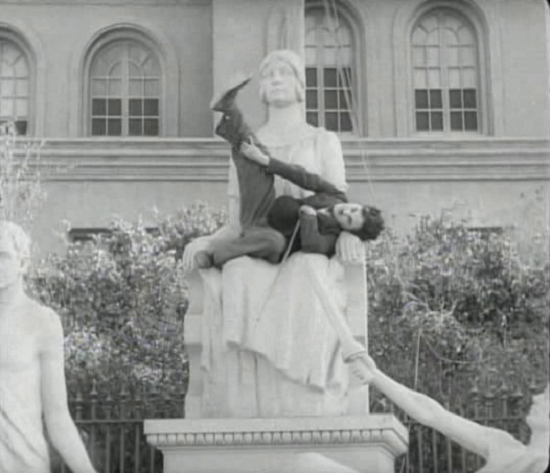 The unveiling of statue: Charlie Chaplin as the Tramp

Only Charlie Chaplin could be bold enough to film a silent movie during the heyday of sound in the early 1930s. Charlie Chaplin was deep into production of his last silent film City Lights when Hollywood was overwhelmed by the talkie revolution. After months of anguished contemplation, Chaplin decided to finish the film as it began - in silence, save for a musical score and an occasional sound effect.

The first encounter with the blind flower girl

In what is perhaps the most memorable opening scene in cinema history, we see a group of politicians on a stage getting ready to unveil the city’s monument symbolizing its continued “peace and prosperity”. Despite being a silent film, we do hear sounds from the politicians but more of a quacking sound than their actual voices, clearly a clever ploy by Chaplin directed towards politicians in general. The large audience in attendance looks eager to witness the unveiling and once the covers are removed, they notice something that is at once, strange and hilarious. It’s the Tramp, played by Charlie Chaplin, napping on the statue’s lap, delirious to the crowd looking at him in complete astonishment, wondering how he reached there in the first place. What follows soon after, is one of Chaplin’s many trademark scenes of comedic genius and showcases some of the greatest comedic skits ever captured on film. 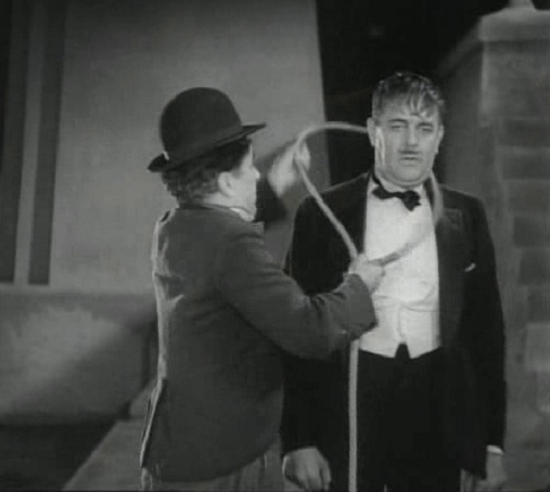 Saving the millionaire from suicide

City Lights, a film which Chaplin wrote and directed himself, tells the story of his iconic character, the Tramp, as he wonders around the city. He befriends a blind flower girl and cannot help but fall deeply in love with her instantly. One evening, the Tramp runs into a drunken millionaire (Harry Myers) who is trying to commit suicide. The Tramp convinces him to live, whereupon the millionaire showers him with gifts. They return to the millionaire's mansion, where the Tramp gets a change of clothes, and then go out on the town, where the Tramp inadvertently causes much havoc. 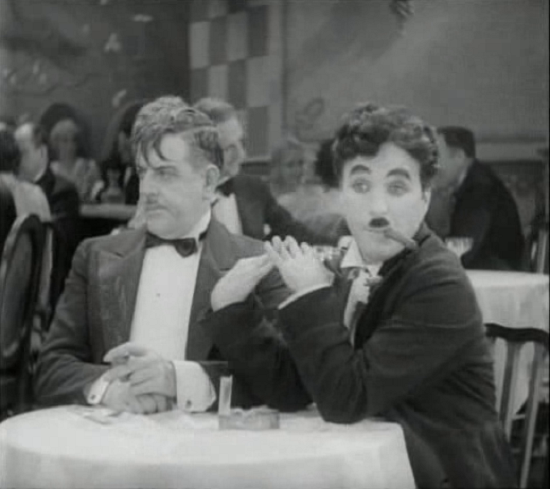 With the millionaire in a restaurant 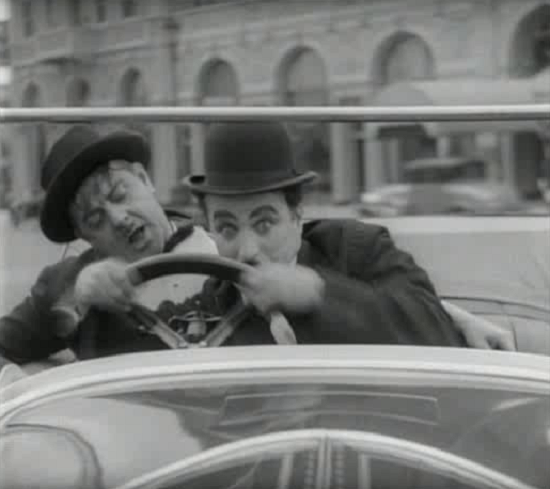 The reckless drive in Rolls-Royce

Returning to the Flower Girl's apartment, the Tramp spies her being attended by a doctor. He decides to take a job to earn money for her, and becomes a street-sweeper, managing to annoy his new coworker. Meanwhile, the grandmother receives a notice that she and the Flower Girl will be evicted if they cannot pay their back rent, but hides it and goes out to beg. The Tramp visits the Flower Girl on his lunch break, and sees an ad for an operation that cures blindness. He then finds the notice and promises the Girl he will pay it. But he returns to work late and is fired. 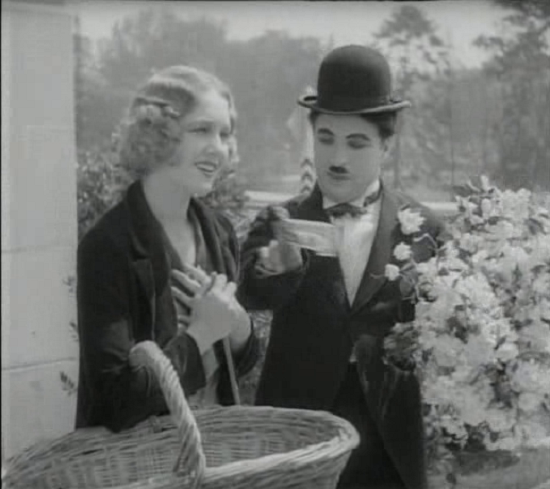 Buying the whole flowers from the flower girl

Dejected, he passes a boxing venue, where a fighter convinces him to spar with him, throw the fight, and they'll split the prize money. But the fighter turns out to be a fugitive from justice and flees, leaving the Tramp to fight a no-nonsense replacement. Despite a valiant effort, the Tramp is thrashed. He meets the drunken millionaire again, who takes him to the mansion and gives him $1000 for the Girl. But two burglars sneak in and clobber the millionaire, and when he comes to, he accuses the Tramp of stealing. 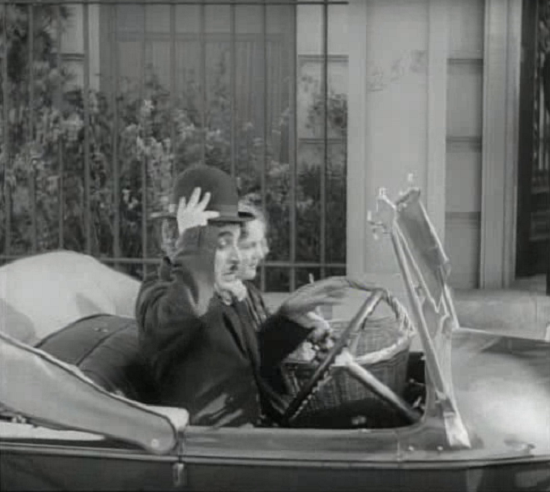 Driving with the Blind girl in Rolls-Royce

The movie thus follows one hilarious incident after another which keeps us glued to every frame. The choreography of some of the routines of the tramp is breathtaking, but you don't have time to consider that because they are so damn funny. The boxing scene, for example, is a brilliant comic dance. Even when he is clumsy it is a moment of perfection. In one scene Chaplin is strolling across a dance floor and when he slips his feet and legs shoot out in a dozen different directions as he tries to regain his footing. It is both sidesplitting and beautiful. The inventiveness behind several such scenes also adds to the delight as each gag grows out of the one before it. 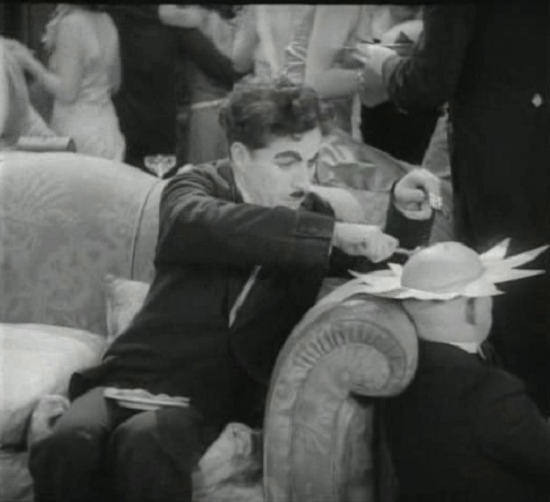 A funny scene during a ball

As with all his other films, the success and brilliance of this picture relies solely on the shoulders of Chaplin. In City Lights, he shows an astounding range of comedy styles such as pantomime, situational comedy, slapstick, as well as melodrama. A couple of scenes highlight this clearly. One of which is that exceptionally hilarious scene where the Tramp somehow gets drawn into a boxing match. Here, Chaplin’s lightness, physical coordination and instinctive acting is on full display. Another extremely impressive scene is the ballroom scene which mostly relies on Chaplin’s gift of pure physical ability that makes one laugh uncontrollably. 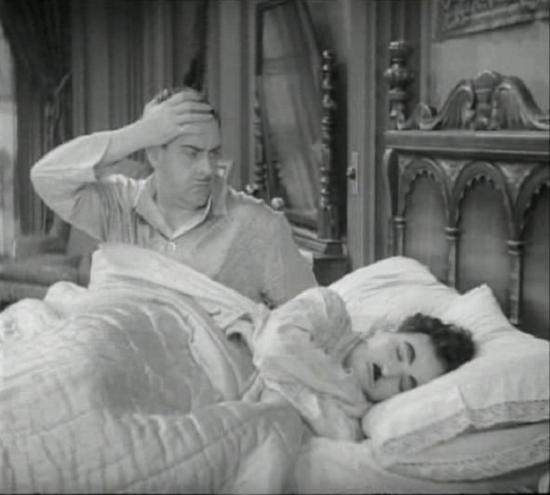 Who is this man lying on my bed?

Another very important element of any silent film is the music. The City Lights music score creates an ardent, claustophobic melodic world as indicative of Chaplinland as the tramp, who is first glimpsed asleep in the arms of a statue. The music is frantic and chaotic during the physical comedy scenes, such as the aforementioned boxing scene, but becomes tender and romantic during the quieter and more dramatic scenes, chiefly those involving the Tramp and the blind flower girl. Despite being a silent picture, you truly feel involved in this film thanks to the wonderful music. 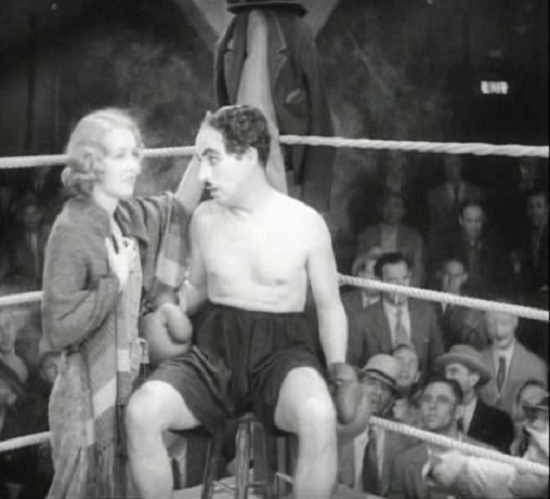 The film’s flawlessness derives from its invaluable balancing act between pathos and comedy. Chaplin does in City Lights what all great cinema should do: he creates a self-sufficient world, a state of mind. His Tramp is the most sympathetic, truly human character ever realized on the screen. He is not poor because he is lazy, or because he wastes what he earns on useless pleasures: he is poor because he gives of himself far more than most of us would be willing to. At the same time, he is not a saint: he tries to maintain his status in class society, even when it is hopeless (for example, just before his final meeting with the blind girl). In other words, the Tramp is proud, opportunistic, irreverent, and yet gentlemanly, selfless, and endlessly suffering: it is so easy to relate to the Tramp, because in so many ways, the Tramp symbolizes many of us. 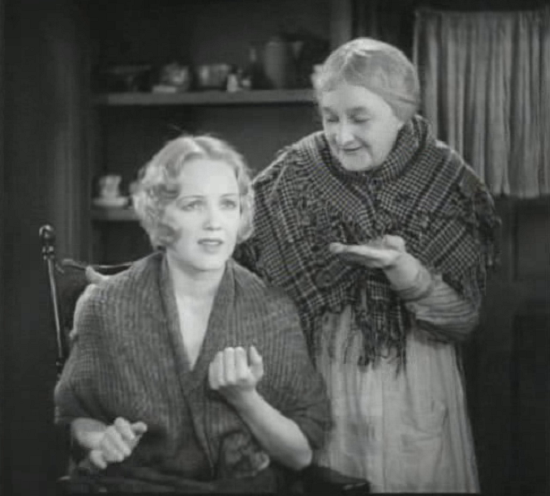 Flower girl with her grandma

After nearly 81 years since City Lights was first released in 1931, one can clearly witness that Chaplin has crafted a timeless classic that will live on for another century or two. The comedy on show here rivals and bests any other comedy that was released since. Watching it for the second time, there were many moments where I found it very hard to stop laughing. It is not just another silent or black and white film. City Lights is something so much more than that. It is a film that shows how one’s brilliance, despite the limited capabilities at the time, can produce something so profound and memorable that is universally cherished and loved. If you were to watch only one silent film, this is undoubtedly the one. 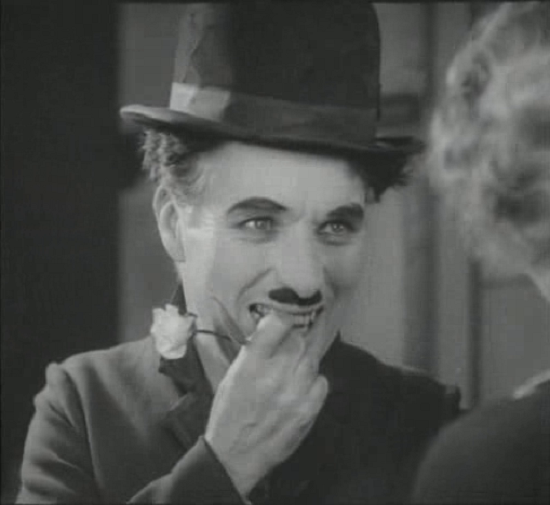 
The  final shot of this film is poignant and only a person with a heart of stone can pass it with dry eyes.  ‘City light’ remains as an ageless classic,  enjoyable by every one in every phase of life.