Winner of the 1961 Palm D'Or, Buñuel's Viridiana was originally outlawed in Spain and horrified Vittorio de Sica. After a screening in Mexico City, the famous Italian neo-realist actually asked Buñuel's wife if her husband was a monster that "beat her when [they] made love." In hindsight, it's difficult to imagine how such a simple film was so misunderstood in its time but the truth is that it remains powerful even now. 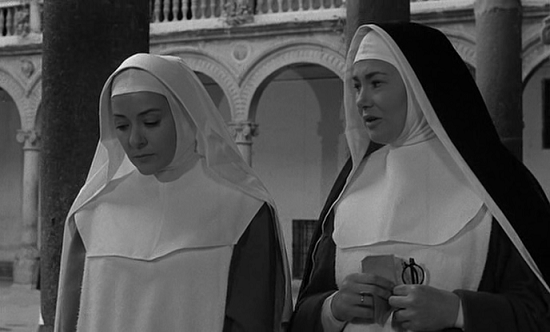 Forming an informal trilogy with Buñuel's Nazarín (1959) and Simon of the Desert (1965), the three films explore similar themes. Although many cite Buñuel's autobiographical sentiments "Still an Atheist . . . Thank God!" when describing these films, none is an attack against the Church or against the good intentions of the protagonists. All three draw extensive portraits of naïve characters, who discover they simply aren't appreciated by an indifferent universe.

Set in a Franco-era Spain that has made only the barest of concessions to modernism (there are telephones and cars), but remains fully locked down under Catholicism at its most patriarchal and reactionary, Luis Buñuel’s Viridiana is satire at its most profound and tragic. 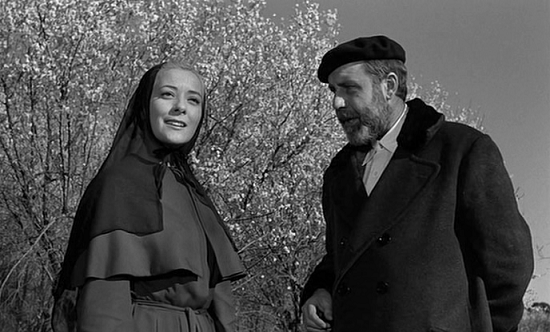 Viridiana (Silvia Pinal) is about to take her vows in a convent when her uncle, Don Jaime (the great Spanish actor Fernando Rey), her only surviving relative, asks her to visit him at his moribund farm and estate. Viridiana hasn’t seen her uncle since she was a child, but is pressured by her Mother Superior to visit for a few days.

At the estate she encounters an uncle both genial and mad. Obsessed with his deceased wife, he is immediately transfixed by Viridiana’s resemblance to her. The night before she is to leave, Viridiana, grateful for her uncle's longtime financial support, reluctantly complies with his odd request and puts on his wife's wedding dress. When Ramona informs Viridiana that Don Jaime wants to marry her, she is aghast, and Don Jaime seems to drop the idea. However, Ramona secretly drugs her drink. He carries the unconscious woman to her room with the intention of raping her though he lacks the courage for it. 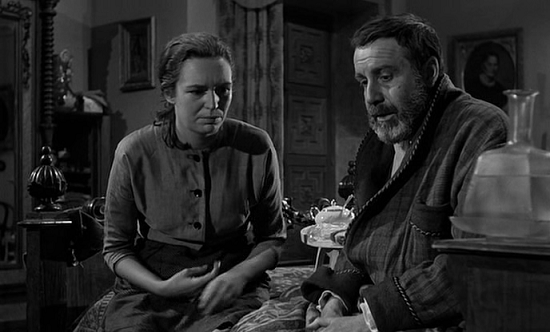 The next morning, he lies and tells her that he deflowered her so that she can’t go back to her convent. When she is undeterred, he confesses he had lied, leaving her uncertain about what happened that night spoiling her for convent life. Decidedly disturbed and disgusted, Viridiana still decides to leave the estate but discovers that Don Jaime has committed suicide before her bus arrives. At the bus stop, the authorities prevent her from leaving. 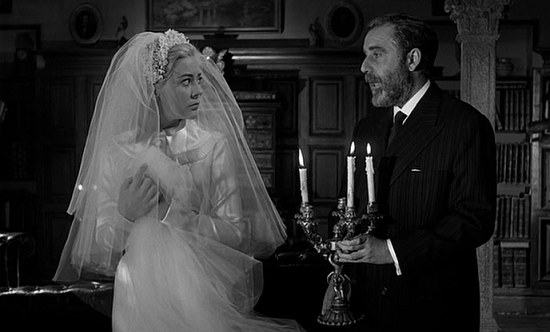 Deeply disturbed, Viridiana decides not to return to the convent. The old Spanish aristocrat wills his property to Viridiana and his prodigal son Jorge (Francisco Rabal)—a real contrast in characters. While Jorge is very practical and business-like, Viridiana idealistically wants to use the estate as a shelter for the homeless tramps and beggars from town. Jorge too moves into the house with his girlfriend, Lucia, and starts renovating the rundown place. Lucia senses that he, like his father, lusts after Viridiana, and she leaves Jorge after a while. Jorge then makes a pass at Ramona, who is not unwilling. 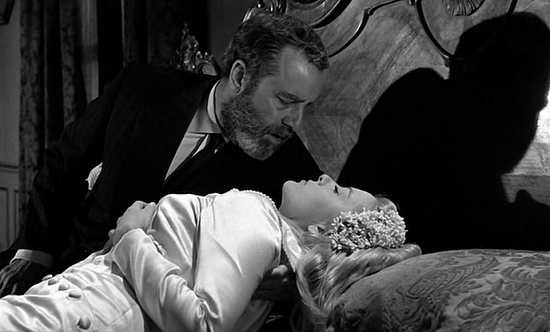 The attempt to deflower Viridiana

Disorientated by these strange events, she invites a band of beggars to live in her uncle's old crumbling estate, hoping to reclaim them, and possibly herself, through prayer and charity. When Viridiana and Jorge leave for a couple of days to take care of some business, the beggars take over the house for an orgy. Jorge and Viridiana return to find the house a shambles. The miscreants excuse themselves one by one and leave. Jorge confronts a beggar, who pulls a knife on him. When the man starts assaulting Viridiana, Jorge tries to rescue her, but another beggar strikes him in the head with a bottle, knocking him out. Viridiana resists being violated long enough for Jorge to regain consciousness. He has been tied up, but manages to bribe one beggar into killing the would-be rapist. 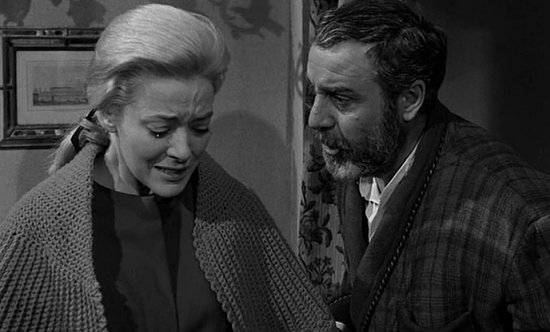 An upset Viridiana plans to leave to the convent

Viridiana becomes a changed woman. Totally disillusioned, she plays a game of cards, to the strains of Shake Your Cares Away, with Jorge and the servant who is his mistress. The game end is a kind of menage à trois.

The film is divided very clearly into two parts: the story of an elderly man’s hopeless love and suicide, and his near violation of a young woman; and that of the young woman’s attempt to rescue a small portion of the world’s unfortunates. There is desperation in the first part and grimly comic failure in the second, but the overall effect is more spirited than that sounds—because of the endless, irreverent life in the filmmaking itself, and because of Buñuel’s commitment to the possibility of change, even when it seems impossible. 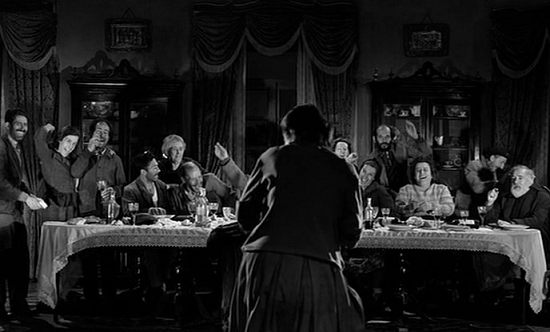 The mock last supper of beggars

The words offense and forgiveness echo throughout the film and are clearly its central preoccupation. Two well-intentioned people, ill-equipped for life—the man because he is timid and solitary and frustrated, the woman because she is inexperienced and self-punishingly religious—both offend in their different ways and cannot find, or no longer seek, forgiveness. Don Jaime, a curious, satisfied smile on his face in the last full shot we see of him, writes a few last instructions and hangs himself. Viridiana, in a revealing self-contradiction, says both that she feels responsible for his death and that there is nothing she need reproach herself for. She means, on the one hand, that her uncle would not have died if she had behaved differently, and on the other, that her virtue is intact. One can feel guilty, Buñuel is saying, and even be guilty, without incurring guilt in any technical or formal sense. 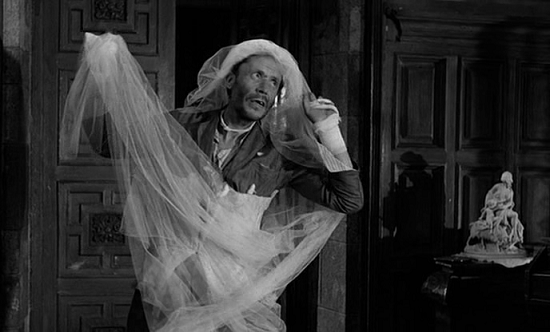 The second part of the film concerns Viridiana’s attempt to do something about her guilt, and critically explores Buñuel’s commitment to change. Viridian's idea in inviting beggars to the house is to give them shelter, clothing, and health, and to get them to work a little. And most importantly, perhaps, to provide for them, as she says, “a little human warmth”—precisely what was lacking in her responses to the tortured Don Jaime. Her project is mocked both by her Mother Superior and by Don Jaime’s illegitimate, and until now neglected, son, Jorge, who has inherited the property, but there is no reason to suppose that ­Buñuel thinks her idea is inherently foolish or wrongheaded—or at least any more wrongheaded than wanting to rescue a dog from suffering if you get the chance. People make mistakes all the time in Buñuel’s films, but they are mistakes he understands and even respects. 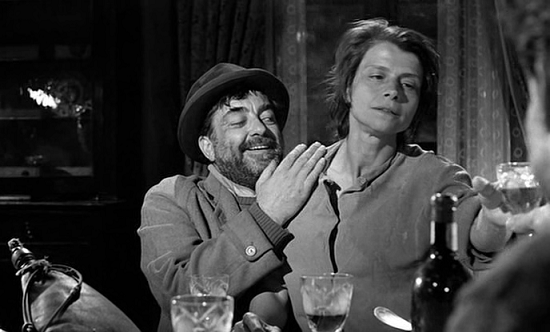 Another scene of drunken revelry

The beggars are a fabulous crew: an imposing blind man, a scurrying clown, a woman with two small children, a pregnant woman, a lame man, a distinguished-looking old fellow from another kind of movie, a stern-looking lady from the same place, a singer, a dwarf, and a leper. Rumors surrounding the film made much of the claim that these beggars were not actors but the real thing, recruited on the outskirts of Madrid. Buñuel at times insisted that they were all actors, but there could be some truth to both stories, and at least one of the beggars, actor or not, certainly lived on the fringes of Spanish society. But the effect here is not primarily that of realism. The beggars represent a set of human possibilities that Buñuel wishes neither to deny nor to celebrate, but to confront, and this is why the film, in spite of the horror of many of its moments and the destructive anarchy of its later scenes, is exhilarating rather than merely bleak or depressing. What we are looking at is both terrible and comic, and we are the better for not having turned our gaze away. As the English critic David Robinson has written, “Other men might be affected to pity by this picture of rot and corruption. But for Buñuel, pity implies resignation, and resignation defeat.”

Left with the estate to themselves for a day, the beggars explore the main house, look at the portraits and the linen and the silver, and decide to have a feast. In a wonderfully wicked cut, Buñuel moves straight from an early moment of this exploration—two women are admiring a fine French tablecloth—to a late stage of the banquet: the main course over, bottles everywhere, and most of the company drunk. One of the small children cries, two women have an appalling fight, the leper puts on the phonograph a recording of Handel’s “Halle­lujah Chorus,” to which he himself dances, wearing the corset and veil of Don Jaime’s dead bride. Others join in the dance, everyone gets drunker, one of the men assaults one of the women behind the sofa. Jealous, because the woman in question is the one he regards as his, the imposing blind man smashes everything on the table with his stick. The screenplay, perhaps evoking the feeling rather than the fact, speaks of “carnage” and of an “absurd orgy.” In the film’s most famous moment, everyone lines up along one side of the table for a “photograph” of a scene that closely mimes that of Leonardo da ­Vinci’s The Last Supper. It is just possible that Buñuel knew more about blasphemy than the pope did after all. 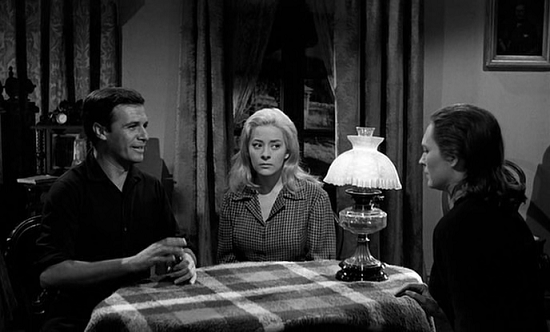 But the blasphemy is not against Christ and the Father. It is against the belief in progress—or at least the conventional sense of it—whether in the form of Jorge’s plans for improving the estate or of Viridiana’s project for improving the beggars’ lives. The beggars are not evil or the dark side of virtue. They are the unruliness of life itself, a reminder that pleasure and curiosity and appetite can always turn to destruction and violence. This is not an argument against pleasure and curiosity and appetite, or an appeal for law and order. It is a picture of a society that doesn’t understand its own needs. Buñuel’s skepticism and his sense of outrage concern the smallness of our vision of progress, our narrow attempts to achieve it through rational or moralistic planning, and our anxious disregard of the disruptive forces without which no society would be human.