Few films can match the dazzling visuals and heart-wrenching storyline of Ghobadi's unforgettable Oscar-nominated drama, which spins a tender, engrossing tale about the costs of war from the perspective of three Kurdish children. The film won Glass Bear for the Best Feature Film and Peace Film Award at Berlin International Film Festival.  Turtles Can Fly is a hauntingly beautiful, hypnotic work of film poetry and a sobbing song of indomitable human spirit. 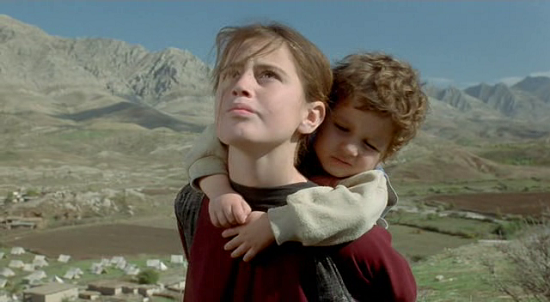 Agrin with her blind child Riga

On the eve of the second Gulf War, a Kurdish village in Iraq waits for the American invasion with a mixture of trepidation and hope, and a hunger for information. The film is less concerned with politics, though, than with the struggles of daily life, particularly those of the local children, many of them orphans and refugees, some of them maimed by mines and otherwise scarred by war. Using non-professional actors, Mr. Ghobadi presents a harsh, almost despairing picture of conditions in Iraqi Kurdistan. What makes the movie so sublime — and even occasionally, improbably bouyant — is its tough, earthy lyricism, a trait the filmmaker seems to share with his subjects. 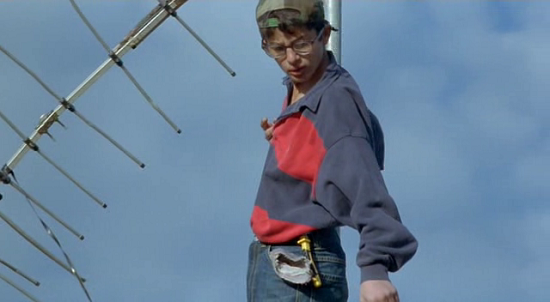 The boy nicknamed 'Satellite' building a satellite in the village

The main character in the film is “Satellite”, a 13-year-old who sets up satellite dishes for villagers, thus gaining his nickname. The other characters include Hengeow, an armless teenager who unscrews land mines with his teeth;Agrin, his sister who was raped by Saddam’s soldiers, and her blind child Riga, the child of that rape;  Pesheow, the best friend of Satellite, who has one non-functional leg, is another victim of exploding mines.

It's just days before the U.S.-led invasion of Iraq and the village leaders cannot get any news of developments. They need a satellite dish. Satellite is pressed into making a deal. There are enough landmines, collected by the children, to be traded or sold to an arms dealer in exchange for a dish. The U.N. representative in the village also pays the children for recovered landmines, which would not be re-armed, but the arms dealer pays more. Turtles Can Fly is that story. It is fiction, but the children who act in it are portraying their own lives. The boy with no arms really has swept minefields for a living. “They have experienced it," says Ghobadi. "You can't believe it, but there are more than 30,000 kids like him in Iraq. Often they cannot cope. He was one of the few who somehow had the fighting instinct in him." 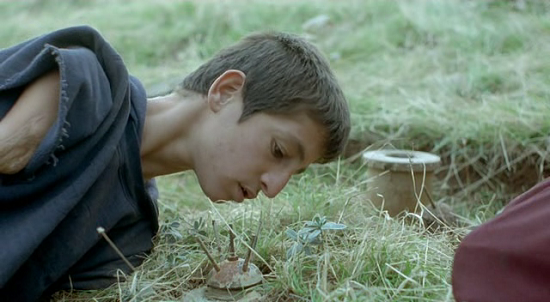 The maimed Henkov defusing a mine with his teeth

There is no doubt that Turtles Can Fly is a human rights film as it deals with human rights violations against Kurds in Iraq in general and children’s rights, land mines and refugee issues in particular. It is also an anti-war movie that criticizes American policy regarding its role in causing war in the name of bringing peace to the world. The narrative of the film is based on the real situation of the Kurds and it is told to us through the actual victims and their daily life in a very realistic manner that makes the film authentic. It takes us into the world of parentless refugee children who have suffered for years under Saddam's rule, U.N. Sanctions, and now the impending American invasion. These children have to hustle to eat, worry about defending themselves with weapons, find out how to acquire masks to protect them from chemical attacks, and escape exploding mines. 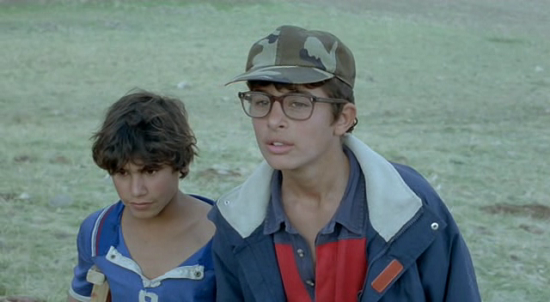 With Pesheow, the best friend of Satellite

Harsh yet compassionate, "Turtles" is filled with potent, resonant images--a blind toddler seated in a mine field, Agrin swigging kerosene to numb a toothache, the maimed Henkov defusing a mine with his teeth. It gets to the heart of the experiences of marginalized children. The film opens right before the American invasion and ends right after it starts. Landmines that have been killing and maiming have been a part of Kurdish life for generations. American and Western European countries manufacture the landmines that Saddam Hussein used there. In an interview Ghobadi said that when he visited Iraq he saw the horrors that children suffer as the victims of war and wanted to capture that in his film. 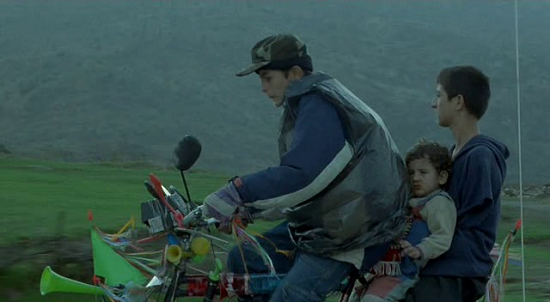 Satellite, the child and Hengeov

The story focuses mainly on two children; "Satellite" is the scrappy, slightly awkward but deeply empathic ruler of the children. As we watch him navigate his daily challenges and make impossible decisions, the poignancy of his character sears into your heart. Agrin is besieged with grief over her losses and the trauma she has endured. We enter her world and can only imagine what it must be like to be so young and have to shoulder her burden. She was raped by Iraqi soldiers and gave birth to a blind child (Riga). Through flashback, viewers see Agrin suffer from vivid memories of war (post-traumatic stress disorder) where/when Iraqi soldiers raped her in a pond. Riga may or may not be her child, but Riga (a child created through rape) symbolizes the memory of her horrifying experience. The metaphor of rape also refers to the occupation of Kurdistan as the director states in his interview “My country, Kurdistan, which lies over Iran, Iraq, Syria and Turkey, has been raped by many countries like the girl in the film.” Moreover, the blindness of Riga symbolizes the horrific and ongoing effect of chemical weapons. 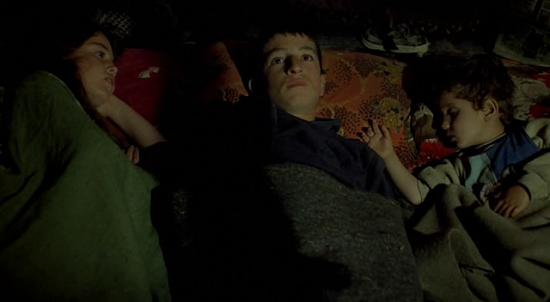 The maimed  Hengeov wakes up with bad dreams

All the charaters in this film are memorable. Agrin by far is the most indelible and mysterious character in “Turtles Can Fly”. In her, the Director has created one of the most beautiful and unsettling portraits of fear, innocence and reasoning, one that is sure to stay with viewers long after her fate is decided. Similarily, despite all odds, Satellite is the fulcrum who strives to bring some cheers to the villagers and his friends. Even the small boy who accompanies him openly says that Satellite is a good man.  Satellite oversees children who clear mines and negotiates at the market to get the best deal for the mines. He is the only one who knows how to install satellite dishes for the anxious refugees starved for news about the impending American invasion, and their destiny. Satellite is a smart self-appointed boss and natural leader who finds out that Agrin's brother, maimed by landmines, has a gift for seeing into the future. He uses the boy's gift to protect the community. 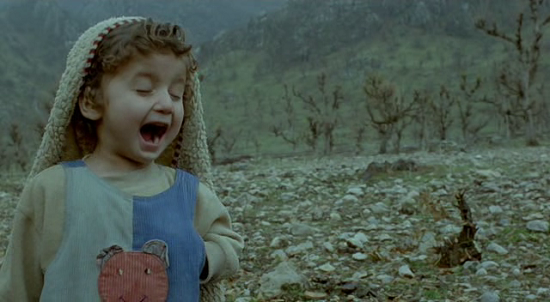 When we hear in the American news that over 125 thousand people have been killed in the Iraq war – and even more have been maimed – our minds naturally protect us from the reality of what that means. We can't possibly imagine the well of sorrow these numbers represent. "Turtles Can Fly" hones in on the stories of the children in a small refugee community and shows us a little about what war really means to the civilians who are actually there. We care about the characters in the film. If a good film is supposed to transport you to a different place and show you another way of seeing the world, "Turtles Can Fly" has succeeded. 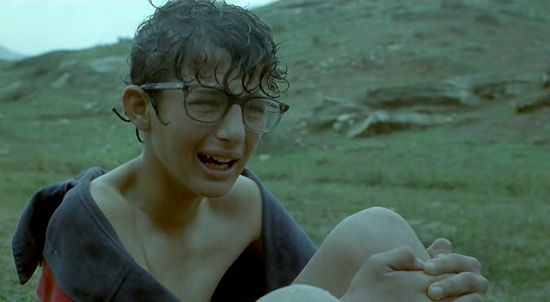 The title Turtles Can Fly is actually a metaphor for the film. They, the children (and presumably the Kurdish people), are like the turtle, struggling to navigate and rise above a sea of adversities, namely their surroundings and circumstances. In this case, they are refugees on the Turkish-Iraqi border eking out a living to gather and sell scrap military equipment, namely landmines.

Watching this movie is a harrowing experience. It is indeed a lyrical and heartbreaking reminder of the human toll of war.