The South Korean auteur Kim Ki-duk's films have been met with critical acclaim worldwide since his debut in the mid-90's, but this movie is his most stunning, sublime film till date. In an age of computer enhanced, if not entirely generated, special effects, high adventure, action upon action scenes, it is an enjoyable respite to view this Korean film of aesthetic simplicity. 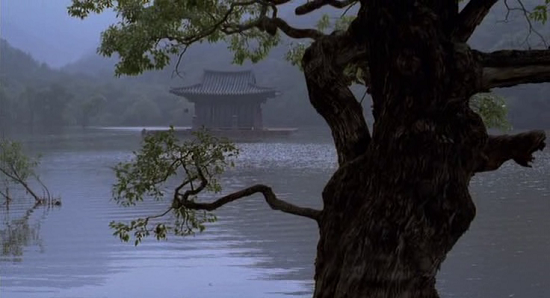 Buddhist monastery sitting on a lake

Predominantly set in a small floating house, Spring, Summer, Autumn, Winter…and Spring is a beautiful story that follows a Buddhist monk from childhood to old age. Each season represents a crucial state in the monk's life, as well as the cyclical nature of life. The film is Buddhist, but it is also universal. It takes place within and around a small house floating on a small raft on a small lake, and within that compass, it contains life, faith, growth, love, jealousy, hate, cruelty, mystery, redemption … and nature. 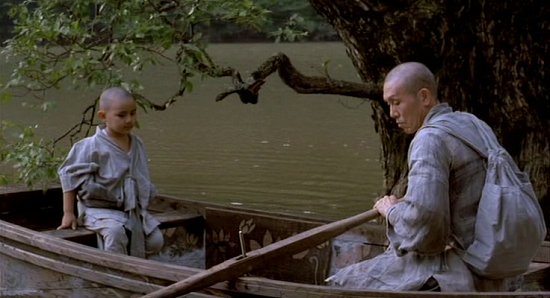 Korean director Kim Ki-Duk has created the film centered around the seasons of a man's life beautifully framed against the seasons of nature. Kim provides a calm surface for his tale of roiling spiritual conflict. A Buddhist monastery sitting on a lake looks the picture of serenity, especially in long shots of the sun-kissed water and verdant shoreline surrounding it. As Kim establishes during the course of the film, the monastery lacks a literal foundation but stays in place through persistence of belief. 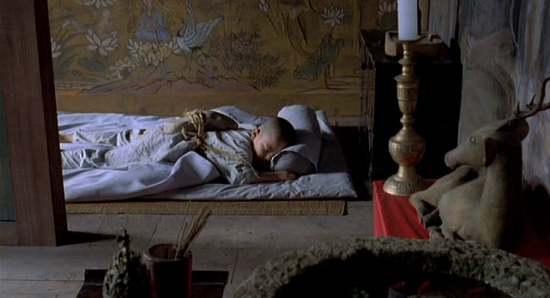 The child apprentice sleeps with the stone on his back

The story is split into the four seasons as it begins and ends with spring as the title suggests. Beginning in the spring of the boy's life, when he is a child learning about the world around him and within him, the wise older monk watches the naive young boy engage in lessons proffered by nature. He lets the boy learn on his own, watching from a distance, and only steps in when it is time to do so. In perhaps the film's most profound statement, he watches as the boy, chuckling to himself, ties string around a fish he catches in the lake, and attaches it to a stone. The child takes joy in the struggling of the fish when he releases it back into the water, where the fish is unable to swim freely. The boy repeats this with a frog, with a snake, gleefully tormenting his fellow creatures. From the woods above the shore of the water, the elder monk watches. He is a silent observer, allowing the boy to engage in his mischief. 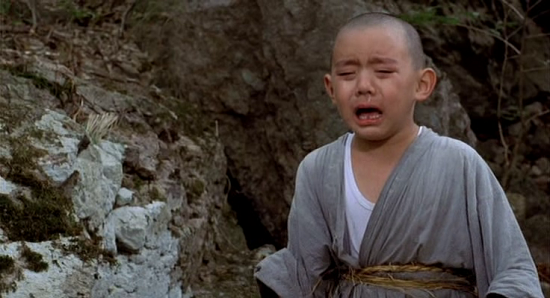 The Actor Oh Young Soo is the picture's emotional anchor as a patient older monk schooling a boy to become his replacement. The tranquility of Oh's demeanor is most powerful in its absence. When the older monk sees the child tying stones to small animals' legs, Oh registers a flicker of doubt and then seems to banish the thought just as quickly. The teacher's task hasn't changed, after all, just the degree of difficulty. 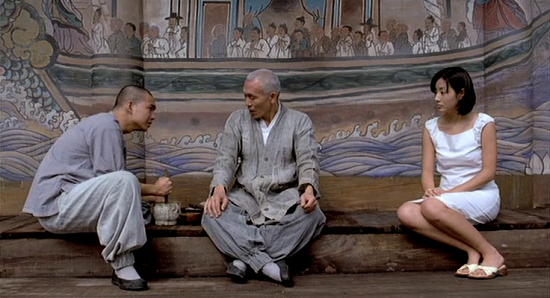 The young apprentice prepares herbal medicine for the girl

The monk waits for the night and when the boy sleeps; he ties a rock to the boy's back, precisely as the boy did with the tiny creatures. When the boy wakes upon morning, he finds himself weighed down with the rock, and when he questions the elder man, is told that the rock will not be removed until the boy removes the stones he tied to the creatures the day before. Should he not have rescued the creatures in time, the stone will then be a weight the boy must carry in his heart ever after. The lesson is simple but sustained; the young man will return to it much later in life. 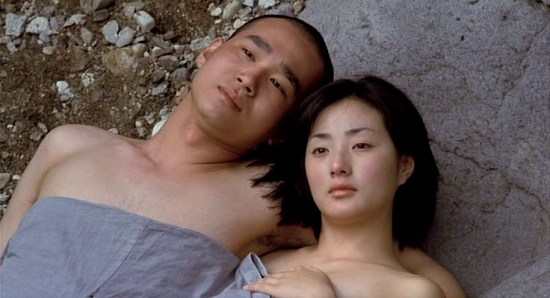 Summer: The young apprentice with the girl who came for treatment

Summer opens the door to love, affection, and desire as the young boy has become a young man. This begins with the old monk who receives a young woman that is sick. The mother of the young woman requests that the monk help to cure her daughter that seems to suffer from some sort of restless melancholic ailment. Powerfully and helplessly attracted to her, the apprentice starts wobbling on his spiritual path, secretively groping her as she sleeps and generally acting the fool. Kim incorporates the young couple's lovemaking into the landscape. Their nude bodies blend seamlessly with the rocks, streams and foliage. "Why are you suddenly praying, when you have never done it before?" his Master asks suspiciously. The old monk acknowledges as much when he discovers the pair together. "I'd go mad if I couldn't see you," the apprentice says, "I don't know why I feel like this." The two continue to meet surreptitiously until discovered by the Master, who notes the girl is no longer sick. "That was the best medicine for you!" he concludes, but asks her to leave, telling his apprentice, "Desire leads to attachment. Attachment leads to intention to kill." The boy cannot bear when the girl takes leave after getting cured of her illness. Unable to live without her, the apprentice leaves the monastery and follows her into the world. 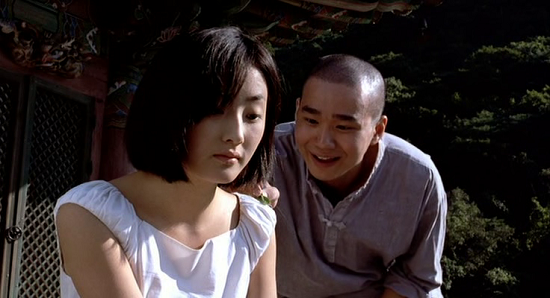 A playful moment: The young apprentice and the girl

Autumn is the season when the woods change from green to an explosion of color. Ki-duk Kim use this natural phenomenon of the seasons to a full effect as the season displays the aftermath of a cataclysmic change in the life of the apprentice who returns to the monastery. In 'Autumn' the old Master, alone now on the lake, happens to read a newspaper article about his apprentice, now in his 30s, who has killed his wife and disappeared. Soon he turns up, full of rage and hate and with the bloody knife that he stabbed her to death with. When he tries to commit suicide, he earns a beating from Master. "You may have killed someone, but you cannot kill yourself so easily." The Master sets him carving a sutra on controlling one's mind into the monastery's wooden deck. When police turn up to arrest him, the Master's benign influence soon has them lending a hand with paint! However, when the time comes for him to go, the Master releases him and the three leave. Left alone again, the Master neatly folds his robe and slippers in front of the altar, builds a pyre on the rowboat and ends his life with calm, resolute dignity. 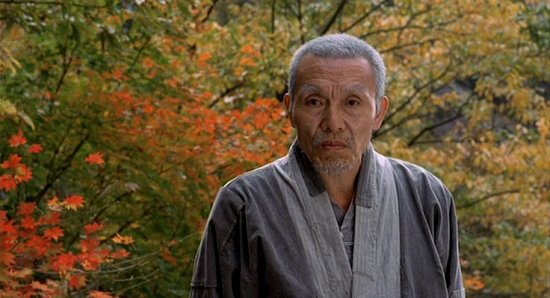 The Master in autumn

In 'Winter' the apprentice, now middle aged, returns to the lake, walking across the frozen lake that he rowed over as a child. Opening up the monastery for the first time in decades, he finds a snake curled on the pile of clothes his master left behind. Excavating his master's charred remains from the icy corpse of the boat he sets them in a place of honor on the altar and sets about a life of prayer, meditation and martial arts exercises. Soon a woman with a baby comes, her face invisible behind a purple shawl. She leaves the baby with the apprentice and attempts to escape but accidentally falls through the ice, drowning. The apprentice discovers her body, uncovers her face and whatever he sees there causes him to undertake an arduous journey of penitence, roping himself to a millstone, holding a statue of Kuan-Yin, the female Bodhisattva of Compassion, and struggling up the snow-covered mountainside. 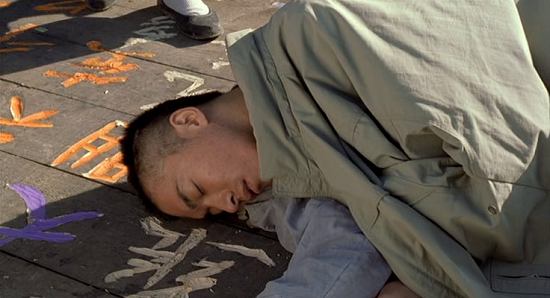 Autumn: The fugitive apprentice sleep after carving Sutra on wood to control his anger.

When spring returns the film brings the audience in a full circle as it returns to where the film once started. 'And... Spring' briefly shows us the apprentice, now a grey-haired elder, living at the hermitage with his own very young apprentice, who briefly torments a tortoise, a hint that the egoist seed of attachment and destruction which led him astray is alive and well in the next generation. The little hermitage is now overlooked by the statue of Kuan-Yin, which the apprentice carried up there in atonement for his life of sin. The cycle of birth, life and death continues. 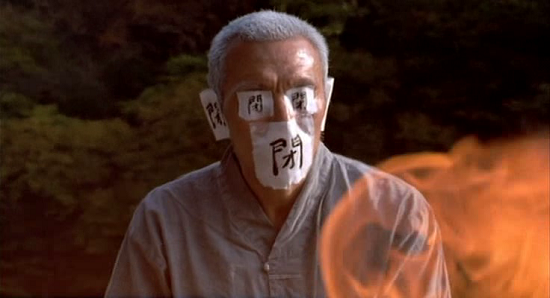 The master departs from his earthly journey

Much of Spring, Summer, Winter, Fall ... and Spring is wordless, but Kim stacks the film with visual symbols of faith. A freestanding, ceremonial door leads from the monks' sleeping area to where the girl lies, and the young man is quick to disregard it to get to his beloved. The symbolic door represents self-respect more than religious reverence. By circumventing it, the young man is ultimately betraying himself. In the initial spring there is a dog and as summer comes along it brings a rooster while a cat enters with the fall. A snake appears in the winter as and as the spring returns it brings the audience a turtle. These animals also represent the end of men's lives as they could be reincarnations of other human's, which is a result of the ripples they once created. 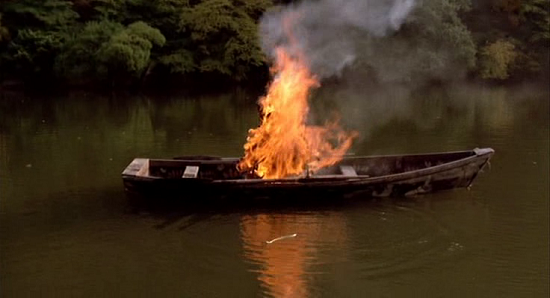 Spring, Summer, Fall, Winter... and Spring ushers the audience into silent solitude through meticulously planned cinematography that maximizes the effect of the natural environment. Each frame is carefully planned as color, form, and movement come together into a meaningful expression of either spiritual, moral, existential meaning, or a personal meaning which rests behind the eye of the beholder. The film becomes a sequential succession of spiritual or existential paintings that are rapidly exchanged before the viewers' retina. The mise-en-scene is exceptionally significant as Ki-duk Kim has left nothing to chance, yet everything is based on chance. This visual oxymoron is very much like the chaotic expression which nature expresses itself within each season. 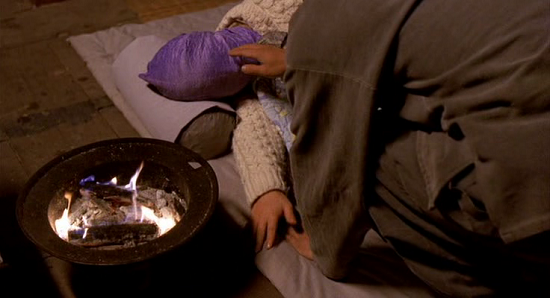 The seasons that follow bring a chill of extreme spiritual challenge, then the warmth of nature's constant opportunities for renewal. Transcendence, as this picture so ably demonstrates, is only truly impressive when there's something difficult to transcend. 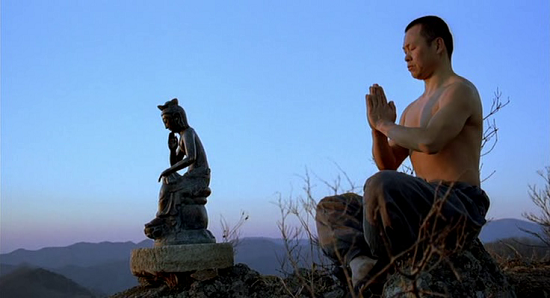 The Young master installs the Statue of Kuan-Yin, the female Bodhisattva of Compassion

Spring, Summer, Fall, Winter... and Spring is a sublime movie and unforgettable once you are exposed to its magic. It is symbolic, complex, elegantly simple, beautiful, evocative and haunting. We are moved and comforted by its story of timelessness, of the transcendence of the eternal.