"The Treasure of the Sierra Madre" is one of the greatest stories ever to come out of Hollywood and remains one of the most insightful films ever made about greed and the thorny effects of temptation on human nature. One never gets tired of watching this masterpiece. John Huston created a work of art with this pessimistic, cynical and yet oddly uplifting exploration of human behavior locked in the guise of a simple adventure story. The power of materialistic greed corrupts absolutely and completely in this film, which stands proudly next to the finest stories of Steinbeck. 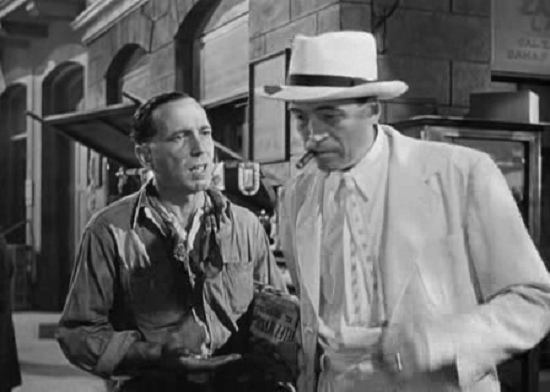 Hi Mister, Will you a stake a fellow American to a meal? (Bogart and John Huston)

Based on B.Traven's Marxist tome, the film centers around three prospectors confronting greed, betrayal and death while searching for gold in the Mexican mountains. "The Treasure of the Sierra Madre" won Oscars for best director (John Huston), best supporting actor (Walter Huston) and best screenplay (John Huston). The film was also nominated for best picture but unfortunately lost out to Laurence Olivier's "Hamlet.

"The Treasure of the Sierra Madre" tells the uncompromising tale of three men thrown into a situation where their basic characters and instincts are put to the supreme test. The story in actual fact is a searing study of greed and opportunity and what it does, or can do to essentially ordinary decent individuals. 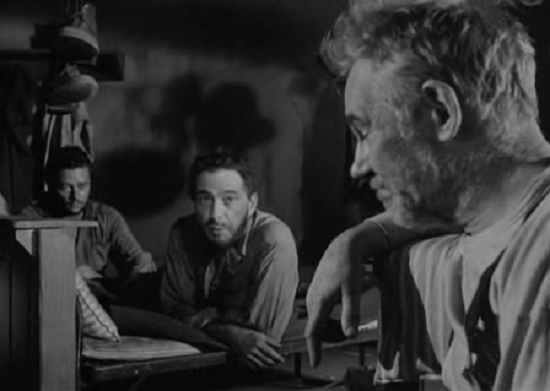 Bob Curtin and Fred C. Dobbs meet with Howard in search of gold

This simple tale of three American prospectors in the Mexican desert seems lifted straight out of archetypal mythos, with the tragic Fred Dobbs (Bogart)—a panhandler who professes to only want his "fair share" of gold (that is, until the gold actually shows up)—functioning as the moral lynchpin. Ultimately unlikable but achingly human in his weaknesses, Bogart saw incredible acting possibilities in the character (in the months before production began, he told New York Post critic Archer Winston, "Wait till you see me in my next picture, I play the worst shit you ever saw!"), and the result is a brilliantly charted fall from something like inverted grace. 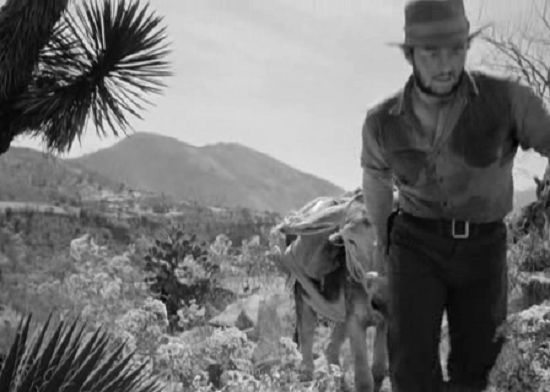 The arduous journey in the mountain: Bob Curtin

In 1925, Fred C. Dobbs (Humphrey Bogart) is stuck in Tampico, a small town in Mexico, broke. We first see him living from hand to mouth and literally down to his last dollar. He meets another drifter from America, Bob Curtin (Tim Holt). Both have been cheated out of hard-earned wages by a dishonest employer named McCormick, and when they corner him in a bar, they beat him so savagely that it seems pointless to hang around town. Their next move is suggested by the old-timer Howard (Walter Huston), who they've overheard talking about gold. They think he's good for advice and not much more, but he has the stamina of a goat and is soon filling their ears with practical advice about how to find gold, which is not too hard, and how to keep it and not get killed, which is not too easy. 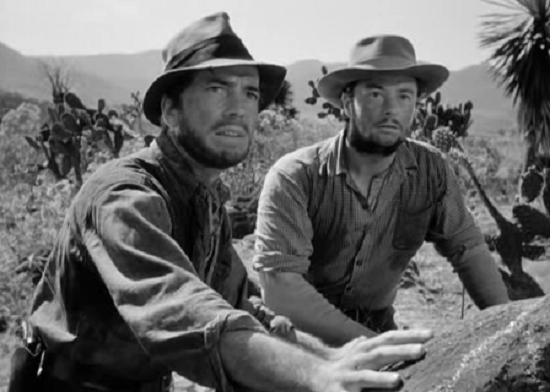 Life changes for Fred C. Dobbs when he wins a substantial prize in the lottery. Sick of his poverty-stricken life, Fred C. Dobbs decides to venture into something for better living. He teams up with Bob Curtin and the old timer Gold Prospector Howard. The reason for the collaboration is the lure of Gold deposits in the Sierra Mountains which seem to be ripe for the pickings if only one can get to them. The three pool their savings, buy equipment, and set off to hunt for the treasure of the Sierra Madre. 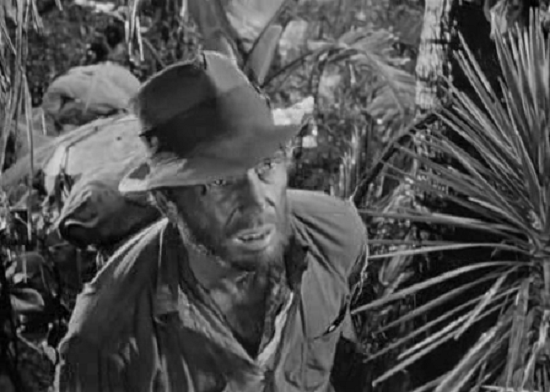 A tired Fred C. Dobbs at the end of the journey

While Dobbs and Curtin can provide the muscle needed to extract and carry the gold, Howard provides the know-how and the experience to avoid the other pratfalls that they may encounter along the road to making their fortune. What develops is a gritty, rugged three character study of the lengths that individuals will go in the pursuit of wealth. In their case it leads from basic greed, through mistrust of each other, to violence and even attempt to murder. Certainly the story is not a pretty one but it is riveting in its startling depiction of the moral decline so easily possible in even the most decent of men. 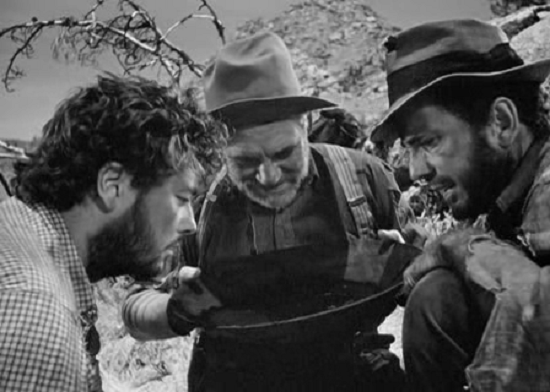 Dobbs begins as a wasteful, short-tempered glutton for pleasure (the film's silent nods to prostitution are particularly savory) and ends up insatiably greedy to boot and paranoid that everyone else is even worse than he. But what remains astonishing is the flickering light of humanity buried deep within the fellow, who we imagine might be decent enough if he weren't so often getting the short end of the stick and not under a truly considerable temptation: over $100,000, without inflation. An early experience at the hands of a dishonest employer helps to justify his cynical expectations, but the varying, seemingly endless contradictions offered by his character more so suggest someone who perpetually wants to have his cake and eat it too. He reminds us of our inner potential for evil and, by extension, of great drama's ability to inform and even improve on life itself. Fred's partners—the young, noble Curtin (Tim Holt) and aggressively offbeat, elderly Howard (Walter Huston)—complete the Freudian triangle that ultimately endures 10 months of hardship at the hands of mother nature and, to varying extents, each other. 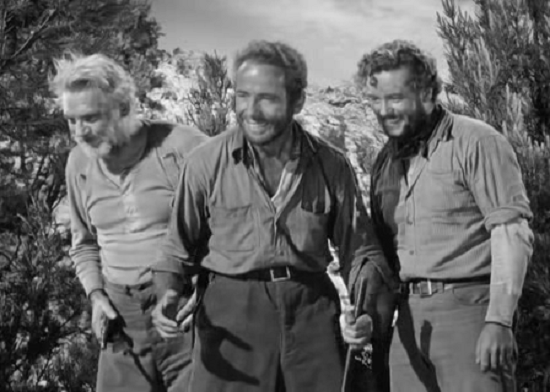 The heart of the movie takes place on the slopes of mountains, which the title identifies but the characters never do; they simply address it as "mountain." They are so exposed in this landscape that only Howard's experience and rough Spanish get them through. They start out as partners, but the moment they find real gold, Dobbs grows avaricious, suggesting they divide their gains three ways, every night. Soon they're hiding their gold separately, and there is a long night when Dobbs awakens in the tent to find Howard gone, and then Curtin awakens to find Dobbs gone, and finally old Howard observes the turn has come back around to him and so why don't they get some sleep because they have work to do in the morning. 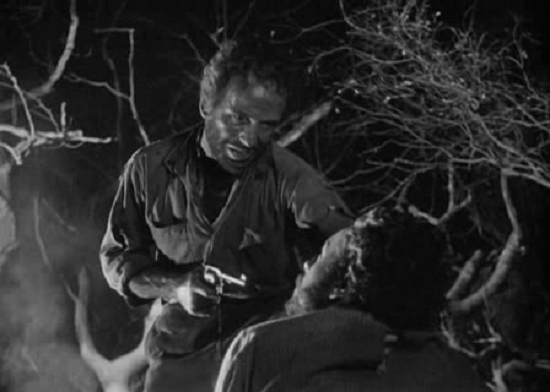 A moment of suspicion and mistrust: Fred C. Dobbs and Curtin

Walter Huston playing the old timer who has seen it all and often finds himself acting as referee between the two younger men who through lack of experience and impatience often find themselves in hot water. Howard has been here before ("I know what gold can do to men's souls'). He plays a tactful peacemaker, agreeing with Dobbs' paranoid suggestions because he knows they will make little difference at the end of the day: Either they'll get out with their gold, or they won't. The performance is a masterpiece by Walter Huston, John's father, and rightly won an Academy Award (John Huston won two more, for direction and screenplay). Listen to the way the senior Huston talks, rapid-fire, without pause, as if he's briefing them on an old tale and doesn't have time to waste on nuance. He does a famous dance when he finally finds gold, playing the stereotype of a grizzled prospector, but sees how his eyes are sometimes quiet even when he's playing the fool; he reads every situation, knows his options, and tries to slow Dobbs' meltdown. 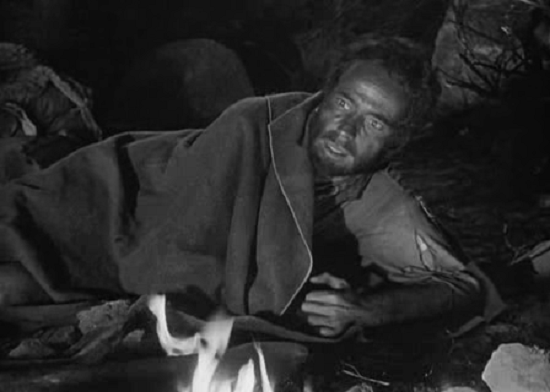 Humphrey Bogart is the very soul of this story and his is a stunning performance in a complex and unappealing role which lot of actors would not have succeeded in making multi dimensional as Bogart does here. The movie dwells in essence more about character than gold, and Bogart fearlessly makes Fred C. Dobbs into a pathetic, frightened, selfish man - so sick we would be tempted to pity him, if he were not so undeserving of pity. Humphrey Bogart renders a superlative performance - one of his best - and completely different to his smooth portrayal of Rick in "Casablanca". His character as Fred C. Dobbs was shifty and devious verging on paranoia and madness. 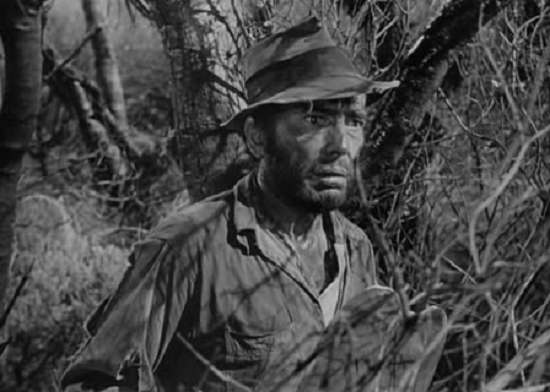 A lonely escape with sacks of gold dust

The film also enlightens and entertains in the best sense. The worst does happen to many of these characters and almost nobody displays true altruism, hence the pessimism and yet all we can do is laugh and therein lies the uplift. Walter Huston's haunting laugh and the end does somehow enliven the viewer’s spirit above any tragedy. "Laugh brother, for that is all you can do. The worst isn't so bad once it happens." 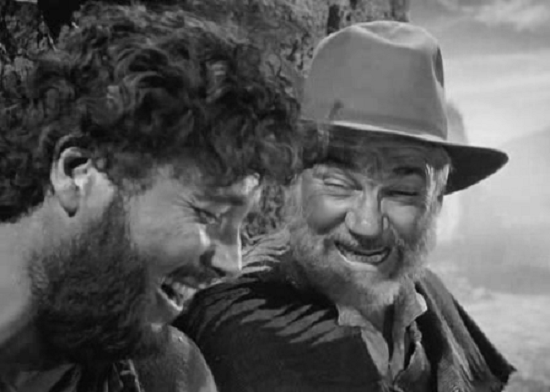 Having a last laugh at their foibles: Curtin and Howard.

"The Treasure of the Sierra Madre" is a gem from the classic era when films centered on powerful acting performances playing out a great story line that made an audience think and follow along. It remains as an enduring study of the human psyche ever portrayed in cinema.