Winner of Silver Lion Award at the Venice Film Festival, "Ugetsu Monogatari" is rightfully considered one of the greatest films ever made and the most widely heralded film of the Japanese director Kenji Mizoguchi. It is a deeply atmospheric and masterfully lensed film that blends flawlessly the real and the surreal and delivers an important message.

It not only encapsulates so many of his concerns (post-WWII questions of jingoism, the plight of women trapped in patriarchy, and conversely issues of national character), but because he also folds them into a dense, fairly complicated episodic narrative, taking place during Japan's civil wars of the 16th century. (Because the storyline has what could legitimately be considered "twists", though Mizoguchi purposefully undercuts the plot's potential surprises by foreshadowing every revelation through internal, formal echoes.) 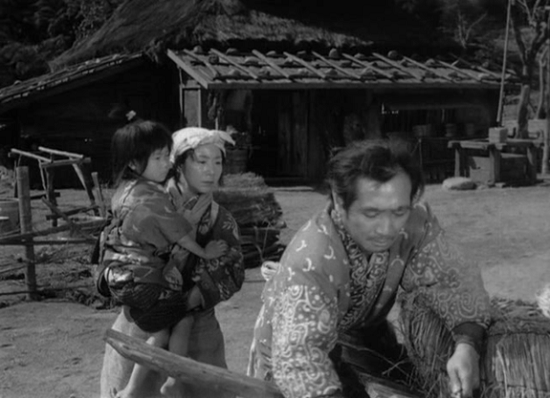 Two brothers, one consumed by greed, the other by envy. In a time when the land is savaged by marauding armies, they risk their families and their lives to pursue their obsessions. The heroes are rough-hewn and consumed by ambition, but the film style is elegant and mysterious, and somehow we know before we are told that this is a ghost story. 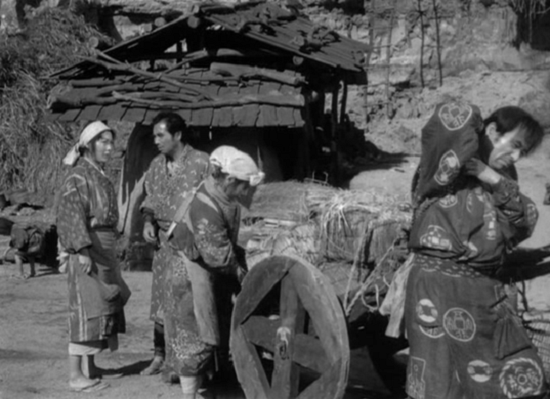 Genjuro and Tobei leavse to town as the wives stay back

16th century Japan, the Civil War. While gangs of warriors clash and raid villages across the country, potter Genjuro (Masayuki Mori, When A Woman Ascends the Stairs, The Bad Sleep Well) works hard, hoping to get rich. His neighbor, apparently his brother, Tobei, dreams of becoming a respected samurai, but does not have enough to buy a proper uniform.

The opening shot is one of Mizoguchi's famous "scroll shots," so named for the way it pans across the landscape like a Japanese scroll painting. We see a village, the roofs of the rude houses weighed down by tree branches to keep them from blowing away in the wind. We meet Genjuro (Masayuki Mori), a potter, and his brother Tobei (Eitaro Ozawa), a farmer. Although gunshots on the wind suggest an army is near, Genjuro is loading a cart with bowls, cups and vases, packed in straw. His wife Miyagi (Kinuyo Tanaka) begs him not to risk a trip to the city at this time of conflict -- to stay home to protect her and their son. But he insists, and Tobei, filled with goofy excitement, insists on coming along, despite the protests of his wife Ohama (Mitsuko Mito). 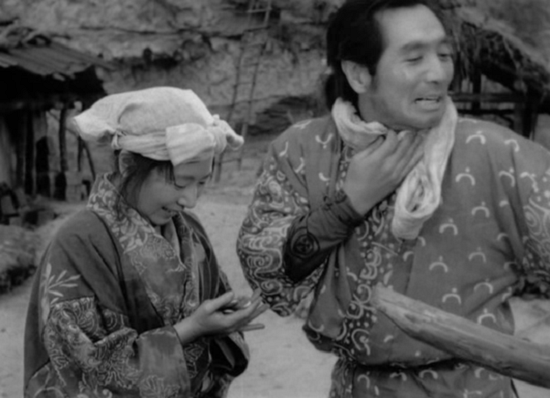 Genjuro gives gold coins to his wife after return

Genjuro returns with treasure: gold coins, which he insists his wife weigh in her hand. He makes her a gift of a beautiful fabric, bought in the city, but doesn't understand when she says that the cloth means less than his love for her. All he can talk about is making more pots and more money. Blinded by the gold, he returns to his work with frenzy.

Tobei sees a great samurai on their trip and tries to enlist in his army, but is turned away as a "dirty beggar" because he has no armor. Now the two men plan their next assault on the city, although when an army sweeps through on the night they have fired the kiln, they fear their work has been lost. Not so; the pots survive, and this time they think it will be safer to journey by boat across the lake to the city, instead of by land. 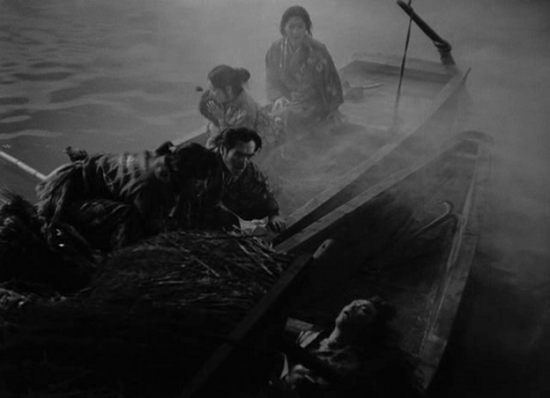 The lake scene where they meet the dying boatman

The famous lake scene is the most beautiful in the film. Shot partly on a tank with studio backdrops, it creates a world of fog and mist, out of which emerges a lone boatman who warns them of pirates. Genjuro returns to leave his wife and child on the shore, and continues with Tobei and Ohama. In the city, his work sells quickly, and he is invited to the castle of a beautiful noblewoman named Lady Wakasa, who admires his craftsmanship. She's played by Machiko Kyo, one of the greatest stars of the period, who was also the woman in "Rashomon." 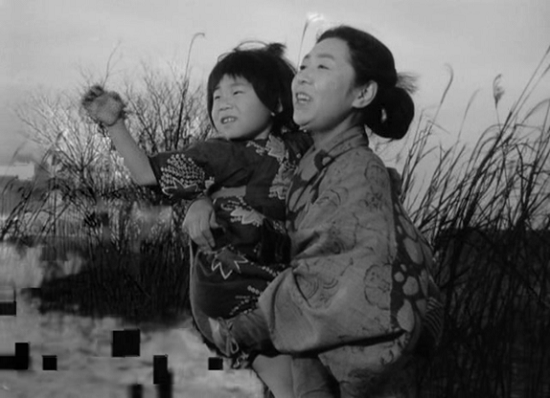 Miyagi and son bids goodbye after disembarking from the boat

Tobei wanders off from his wife and his brother. Time passes. He clumsily kills a samurai and steals the head of a foe that the samurai had killed. Presenting this trophy to the samurai lord, he is praised and given a horse, a house and men to follow him. Filled with pride, he brings his men for the night to a geisha house, only to find that his wife, raped by soldiers after he abandoned her, has become a geisha.

Elsewhere in the city, Genjuro visits a fabric shop and imagines his wife's joy when he brings her more beautiful dresses, but then Lady Wakasa appears, suggesting he may need a guide to her castle. He is mesmerized by her strange beauty; made up like a Noh heroine with smudges for eyebrows high on her forehead, her face shadowed by veils and a wide straw hat, she is like no woman he has ever seen. 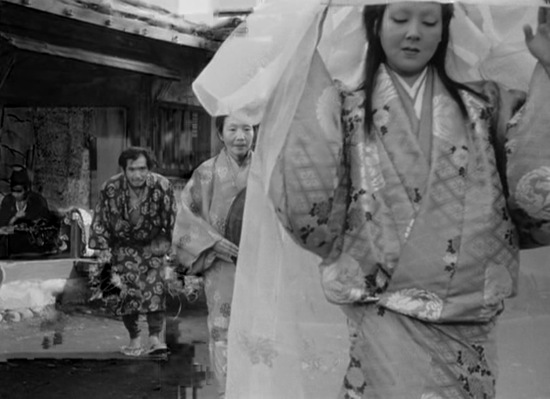 At the castle, she drifts from behind screens and curtains and, regarding his simple pots, asks him, "How is such beauty created?" She praises and seduces him, and the critic Pauline Kael remembers she gasped with delight when he cried, "I never dreamed such pleasures existed!" Perhaps Genjuro should have taken warning when he heard the voice of the lady's dead father echoing through the room, and when her lady-in-waiting advised him, "Don't bury your talents in a small village! You must marry her!"

Mizoguchi (1898-1956) was famous for the theory that one scene should equal one cut, although sometimes he made exceptions. The great Yasujiro Ozu had the same theory, with the difference that Ozu's camera never moved in his later films, while Mizoguchi's style was constructed around flowing, poetic camera movement. Consider a scene where Lady Wakasa visits Genjuro as he is bathing in an outdoor pool, and as she enters the pool to join him, water splashes over the side and the camera follows the splash into a pan across rippling water that ends with the two of them having a picnic on the grass. 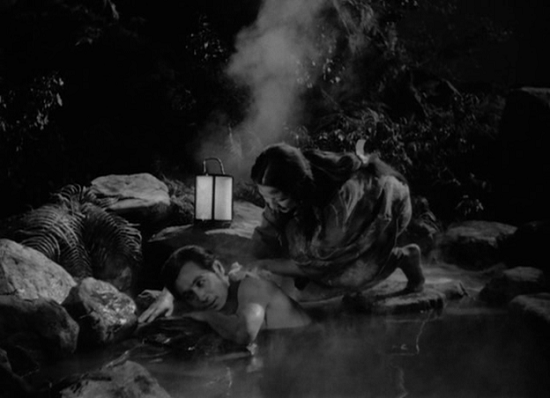 Lady Wakasa and Genjuro in a bath scene

There is a crucial sequence when Genjuro goes back into the city, and on his return to the lakeside castle, is halted by a priest, who calls after him: "I see death in your face! Have you encountered a ghost?" He warns Genjuro against being "beguiled by a forbidden form of love."

Back at the castle Lady Wakasa begins to embrace Genjuro, but recoils, crying out, "There is something on his skin!" Indeed, the priest has covered Genjuro with symbols of exorcism, which seem to burn the noblewoman as if they are flames. 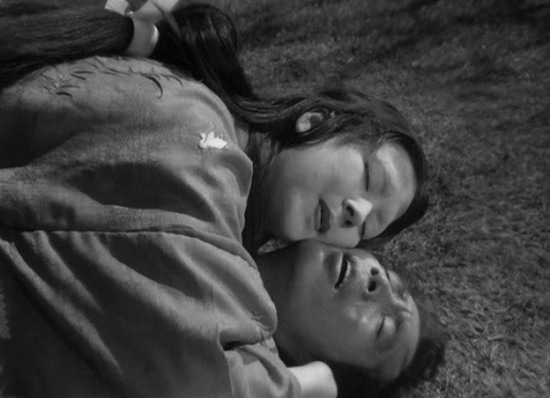 Lady Wakasa is of course a ghost (we never doubted it), and there is a haunting scene when Genjuro sees the castle as it really is, a burned ruin. There is a second ghost in the movie who we do not suspect, and the revelation in that case creates a touching emotional release. It comes toward the end, after both men have returned chastened to their village, and are forgiven by their wives for the male weakness of blinding ambition.

I learn from an article by Gary Morris in the Bright Lights Film Journal that Mizoguchi may have drawn on his own life in the story of "Ugetsu." When the director was a boy of 7, Morris writes, his father lost the family fortune in a reckless business venture. They moved to a poor district, and his 14-year-old sister Suzu "was put up for adoption and eventually sold to a geisha house." So perhaps the sins of the father were visited upon Mizoguchi's two heroes. 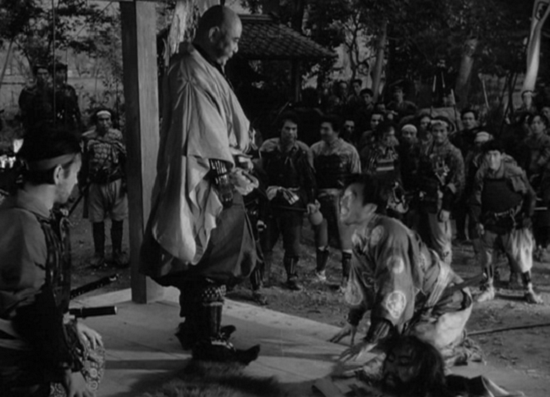 Tobei brings the head of a foe to the samurai Lord

In a career that started in 1923, Mizoguchi ended with a series of masterpieces, including "Life of Oharu" (1952), "Sansho the Bailiff" (1954) and "Street of Shame" (1955), which in its consideration of geishas perhaps draws on the life of his sister. To enter his world, like entering Ozu's, is to find a film language that seems to create the mood it considers; the story and its style of telling are of one piece. 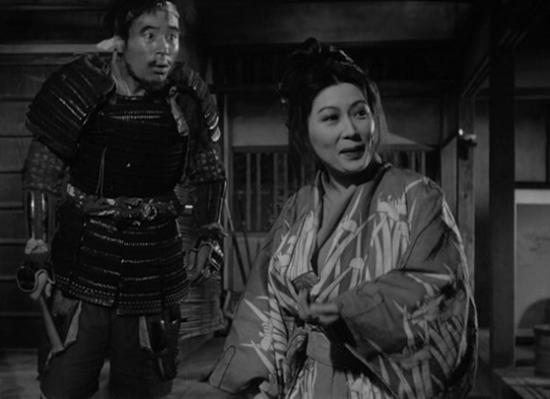 Tobei encounters his wife as a geisha

The characters in "Ugetsu" are down to earth, and in the case of Tobei, even comic, but the story feels ancient, and indeed draws on the ghost legends of Japanese theater. Unlike ghost stories in the West, Mizoguchi's film does not try to startle or shock; the discovery of the second ghost comes for us as a moment of quiet revelation, and we understand the gentle, forgiving spirit that inspired it.
Nor are Lady Wakasa's seduction techniques graphic; she conquers Genjuro not by being sexy or carnal, but by being distant and unfamiliar. Always completely cloaked, often hidden by veils, she enchants him not by the reality of flesh but by its tantalizing invisible nearness. 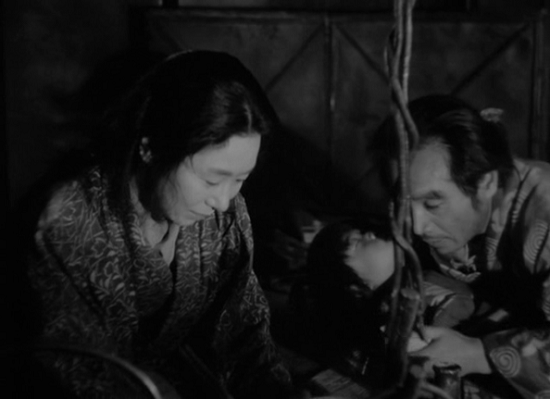 Genjuro returns to his village home

The period detail is accurate and rich. The city marketplace, the headquarters of the samurai, Tobei's visit to a shop to buy armor and a spear, Genjuro's haste when he asks another merchant to watch his prized pots (for he must hurry after Lady Wakasa) – all of these create a feudal world in which life is hard and escape comes through the silly dreams of men. Women are more cautious, and there is a blunt realism in the sequence where Miyagi, left behind, tries to protect and feed their son as armies’ loot and rape the countryside. At the end of "Ugetsu," aware we have seen a fable, we also feel curiously as if we have witnessed true lives and fates.

Ugetsu is a masterful mixture of brutal wartime realism and haunting ghost story. The way Mizoguchi weaves these elements so seamlessly together is what makes it so challenging and yet deeply rewarding as a timeless work of art.