I would advocate every statesman, every conscientious individual of the society and every environmentalist to watch this wonderful film that dwells on the philosophy of gleaning and brings to attention sustainability issues such as reducing waste and how creativity can convert trash into imperial totems. Ms. Varda, who identifies her film-making with the gleaners and their struggle to survive, comes up with a fascinating and lighthearted portrait of the invisible people who live on the fringes of society in this distinctive film. 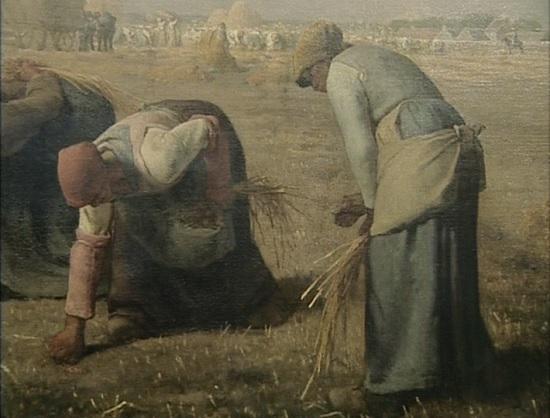 This warm, funny, inventive documentary, both a diary and a kind of extended essay on poverty, dwells on thrift and the curious place of scavenging in French history and culture. Agnes Varda, an intrepid woman in her early 70’s and one of the bravest and most idiosyncratic of French filmmakers, spent eight months traveling through France recording the lives of people who gather what others have thrown away or left behind. Varda’s gleaners retain a resilient, generous humanity, which is clearly brought to the surface by her own tough, open spirit. The film is studded with found metaphors and serendipitous insights. 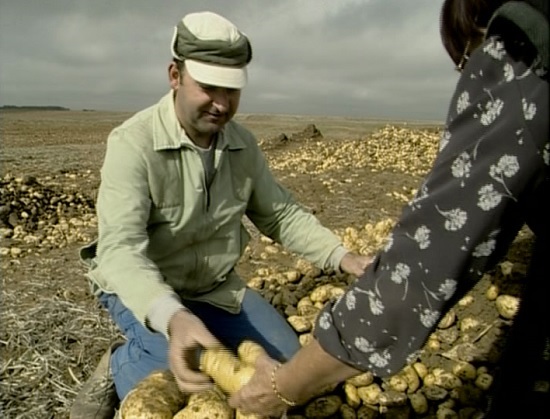 Gleaning Potatoes from the field after harvest

“The Gleaners and I” takes its title, and some of its inspiration, from an 1867 painting by Jean-Francois Millet that shows three women in a wheat field, stooping to pick up sheaves and kernels left behind after the harvest. The image is well known; it appears in the Larousse Dictionary of the French Language alongside the definition of the verb “gleaner”' (to glean). The activity the painting, which hangs in the Musee d’Orsay in Paris, depicts sent Ms. Varda, a warm, intrepid woman in her early 70’s , on a tour of her own. From September 1999 until May of this year, she crisscrossed the French countryside with a hand-held digital video camera and a small production crew, in search of people who scavenge in potato fields, apple orchards and vineyards, as well as in urban markets and curbside trash depositories. Some are motivated by desperate need, others by disgust at the wastefulness all around them and others by an almost mystical desire to make works of art out of things – castoff dolls, old refrigerators, windshield wipers – that have been thrown away without a second thought. 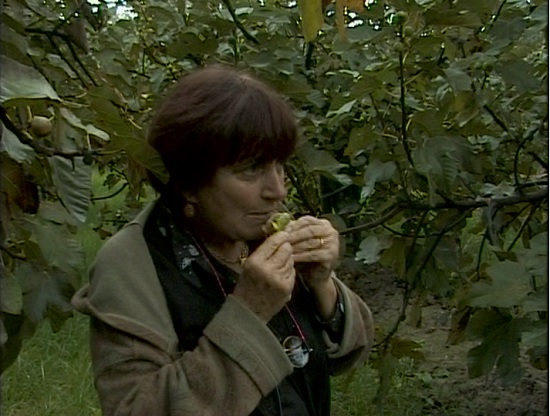 Agnes Varda (director) gleans a fig and eats it

The then 74-year-old Agnes Varda – known, perhaps reductively, as the grandmother of the French New Wave – has executed a lovely feat of self-mythological reinvention in this film. The Gleaners And I picks up several threads she’s followed throughout her career – a concern with traditional crafts and rituals, with the poor and marginalized, and with the everyday minutiae typically excluded from fiction. 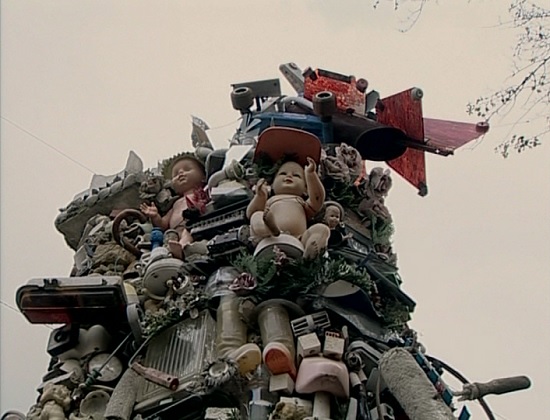 A totem tower made of scarps

The official subject of this film is gleaning, the act of gathering remnants of crops from a field after the harvest. As Varda demonstrates, people can be discovered throughout the French countryside gleaning everything from potatoes to grapes, apples to oysters, much as they did hundreds of years ago (though no longer in organized groups). More figuratively, there are also urban gleaners who salvage scraps from bins, appliances from the side of the road, or vegetables from stalls after the markets have closed. And then there’s Varda herself, a gleaner of images, driving around France with a digital camera and a tiny crew (at times, she wields a smaller camera herself, permitting an even greater degree of intimacy). 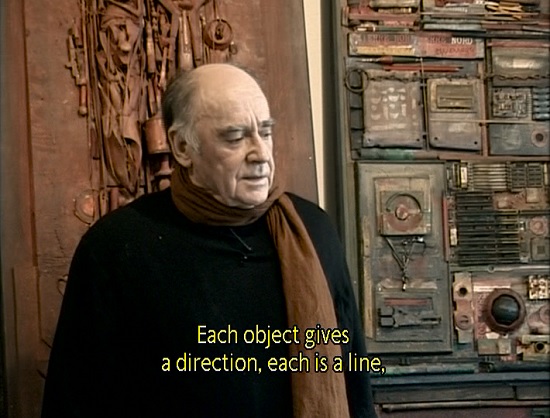 A scrap craftsman: There are no scarps. There are only possibilities

Obviously gleaning in Varda’s sense can be considered a “green” activity, a matter of recycling or conserving items that would otherwise go to waste (several interviewees express outrage that people should allow food to rot while others starve). Yet it probably wouldn’t occur to anyone to pigeonhole The Gleaners And I as an environmental film, any more than green politics is necessarily focused these days on a single issue. Gleaning, Varda implies, can be understood more broadly as a form of resistance, a way of refusing to be boxed in by conventional expectations; as such, it demands that we re-learn age-old skills as well as supply individual creativity and initiative. 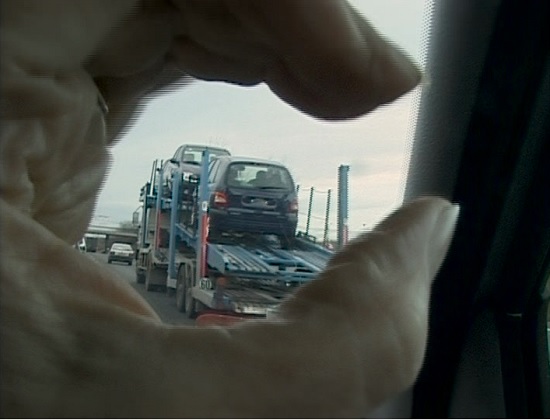 One major way Varda expands the parameters of her subject is by making constant reference to paintings and other artworks, both as illustrations of gleaning’s historic past (paintings by Millet and Van Gogh) and as creative examples of gleaning in the present (sculptures, collages and so on made from found materials). Nor is this latter kind of creation restricted to officially accredited artists, as Varda demonstrates through an interview with a man who builds “totem towers” from discarded dolls (“Dolls are my system,” he explains). In general, one of the film’s most appealing features is its democratic treatment of its interview subjects, who range from gypsies and unemployed young people to a magistrate and a psychotherapist: they’re all respected equally, and Varda lets them speak for themselves without passing judgment. 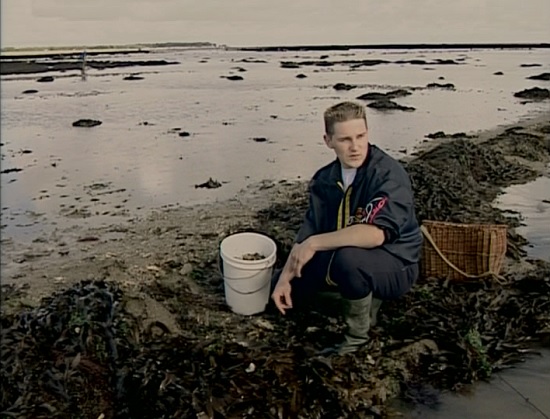 Gleaning oysters after the season

The Gleaners And I  has many yrical shots virtually that negate the difference between grasping an object with one’s hands and approaching it with the camera, as Varda pushes up close to a painting, a rain-spattered windscreen, a knobbly potato or human skin. Such moments have the tactile quality of what Laura Marks calls “haptic” imagery – using the camera as a probing instrument rather than the screen as a canvas, dwelling on surface textures rather than offering a totalizing three-dimensional perspective. 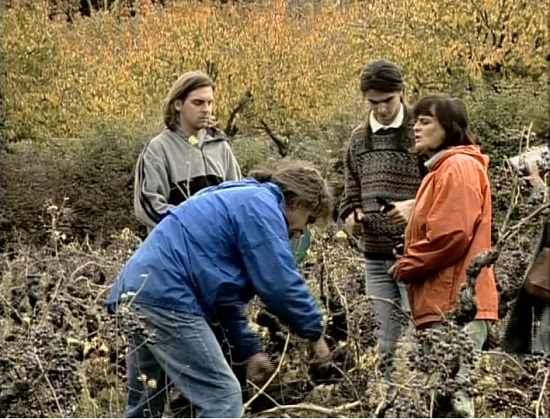 The film’s craft, however, is most visible in its editing, weaving a dense and variegated web of connections with little apparent strain. As a film essayist Varda isn’t as brilliantly witty as Chris Marker, but she has a similarly disarming approach – light and whimsical, yet informed by a scrupulous moral and political intelligence. Some poetic logic hints that her loose form should be taken as the ultimate validation of the film’s theme. 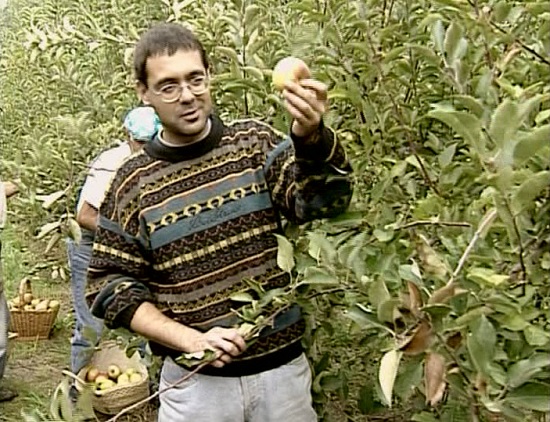 Gleaning from an apple orchard

In presenting The Gleaners And I as itself a collection of gleanings, Varda proposes something comparable to Ursula le Guin’s Carrier Bag Theory of Fiction: narrative not as progress towards a goal but as an open-ended gathering of disparate elements, “necessary elements of a whole which itself cannot be characterized either as conflict or as harmony, since its purpose is neither resolution nor stasis but continuing process”. Paradoxically, then, it’s precisely the moments in the film that don’t seem to “fit” with its subject – like an irrelevant, plangent glimpse of a man looking out across a river – that supply its clearest instances of “gleaning.” 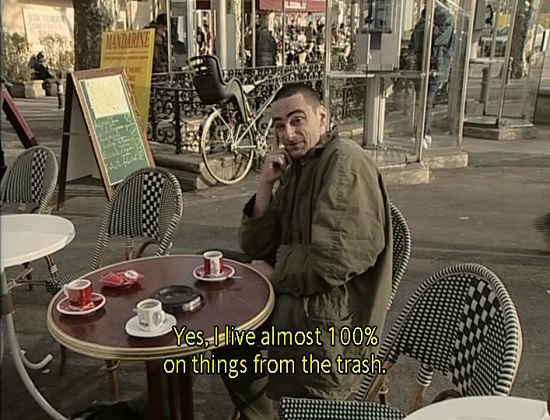 Salvaging is a matter of ethics for me: An ardent Gleaner

Varda is careful to establish that historically gleaning has been “women’s work” – even if the majority of present-day gleaners in the film are male. “Gleaning” as a homely figure for resistance and appropriation certainly has a less than macho ring to it; as a political model it’s modest and pragmatic, strengthening our connection to the reality around us rather than offering an escape into some other, transcendent realm. 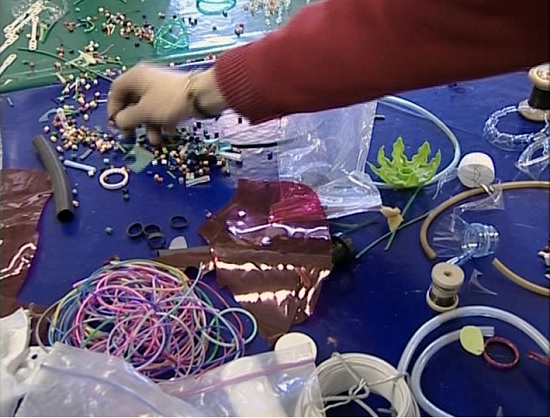 Gleaners are simply people who have learned to value the mundane, trashy and ephemeral, and it’s no great shock that in our society these downgraded categories should be associated with women – particularly older women who aren’t considered glamorous. Wryly, Varda includes herself under the heading of matter to be salvaged, letting the mini-DV camera roam over her wrinkled hands: “I like filming rot, leftovers, waste.” 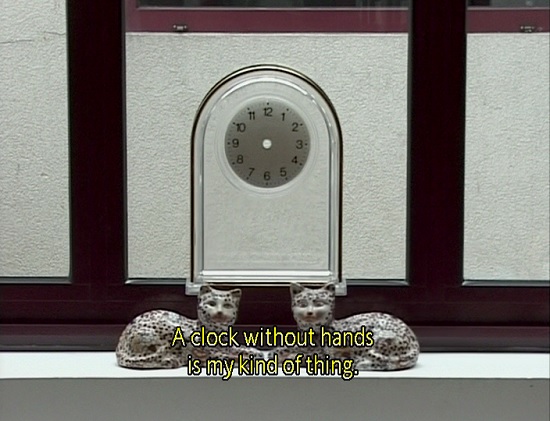 A clock without hands which Agnes had gleaned during the filming

The Gleaners and I is a tribute to all the people who think outside the box, while observing with a humane eye those who understand that “waste” is only a relative term and value is where you find it.