Not many films command as much respect as FW Murnau’s silent classic, Sunrise. Billed as a “Song of Two Humans”, it’s a love story that's more than just a tale of broken hearts and damp hankies. It’s also a landmark in the history of cinema that turns melodrama into high art with the story of a hard-up farmer (George O’Brien) whose affair with a city girl (Margaret Livingston) leads him to the brink of killing his doting wife (Janet Gaynor). 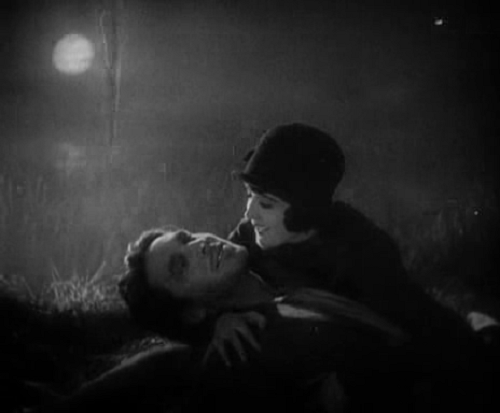 The man with the city girl

As the distinguished film critic Jonathan Rosebaum rightly points out, “Part of what continues to make it great is its creation in a particular utopian moment in film history: the end of the silent era, when movies reached a certain pinnacle of visual expressiveness that was tied to a dream of universality, a belief that cinema could speak an international tongue. Properly speaking, Sunrise is less a silent picture than a pre-talkie, existing in a strange netherworld between sound and silence. It has a very beautiful and adroitly stylized soundtrack of music and sound effects, composed by Hugo Reisenfeld that is an essential part of its magic.” 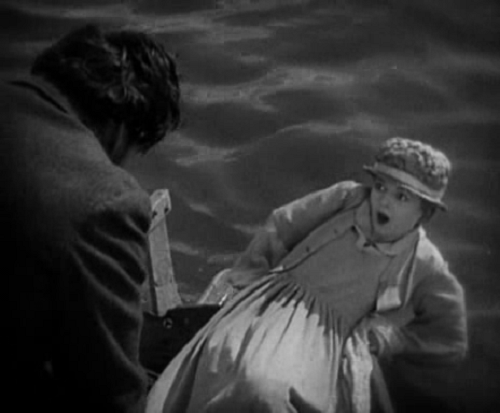 The aesthetics of Sunrise have a lot to do with painting, music and literature, brought together in a remarkably interactive way that suggests another utopian dream: a definition of cinema as the meeting point for all the other arts. The film has three movements, beginning and ending with slow tempos in a rural setting that is separated by an urban Scherzo. Apart from the happy ending, which functions like a coda, the movements might be described as melodramatic, comic and tragic, in that order — accompanied by a painterly control of light passing from night to day in the first movement, from day to night in the second and again from night to day in the third. 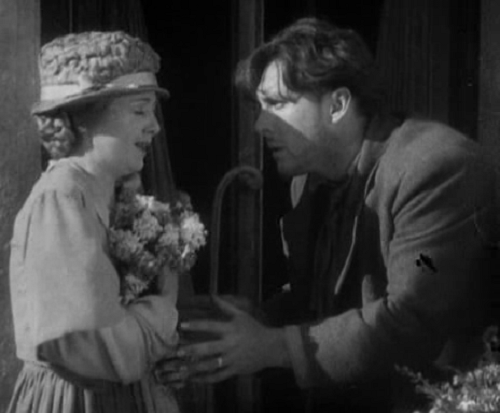 The characters don’t have names but generalized labels. The man (George O’Brien), a simple farmer, is having a torrid affair with a vacationing city woman (Margaret Livingston). She signals to him, by whistling, to meet her for a night of lovemaking in the marshes. Wanting him to move with her to the city, she proposes that he drown his wife (Janet Gaynor) in the nearby lake; but when he tries to carry out this plan the next day, en route to the city, he recoils in horror and succeeds only in terrifying his victim. She flees and boards a trolley, and he follows, begging her not to be afraid of him. The trolley brings them to the city. Her fear and disappointment are overwhelming. He plies her with flowers and cakes and finally she stops crying and accepts his gifts. 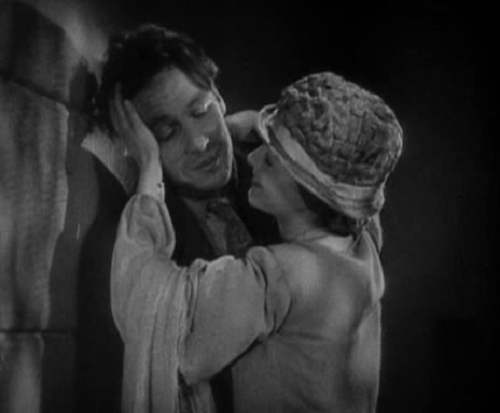 The woman pardons and consoles the man

Over a day and an evening in the city, the married couple gradually become reconciled and fall in love all over again. But when a storm breaks out on their way back across the lake, the wife apparently drowns. Convinced the wife has drowned, the grief-stricken man stumbles home. The woman from the city goes to his house, assuming their plan has succeeded. The man begins to choke her. Then the maid calls to him that his wife is alive, so he releases the woman and runs to the wife, who survived by clinging to one last bundle of reeds. 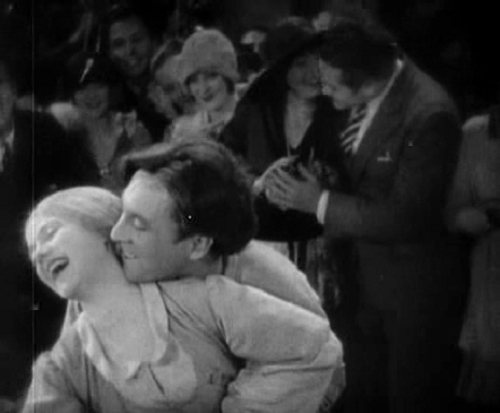 The man dancing with his wife in a city club

The Man kneels by the wife’s bed as she slowly opens her eyes. The man and the wife kiss, while the woman from the city’s carriage rolls down the hill toward the lake, and the film dissolves to the sunrise.

Separating himself from his contemporaries with his keen sense of the possibilities of camera movement, this generic picture gave Murnau the perfect opportunity to break the rules of early cinema. Using superimpositions and tracking shots (most famously in the tram scene) to great effect, Murnau offered a sense of space and place that few other filmmakers had ever achieved. 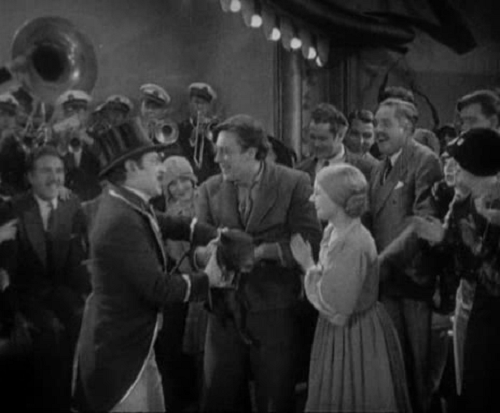 The man catches the errant pig in the dancing hall

Sunrise beautifully contrasts the rolling hills of the countryside with the hustle and bustle of the big city and it then takes us on a journey between two worlds as George O’Brien and Janet Gaynor rediscover their love in the sprawling metropolis. Scenes of the couple wandering through busy barbershops, funfairs and posh restaurants show how these two country bumpkins confront the terrors and wonders of city life. 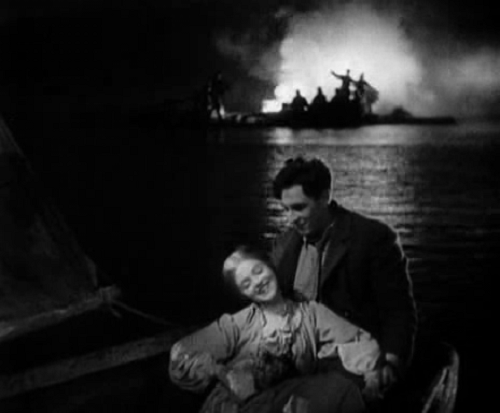 The woman in buoyant mood on boarding the boat for return

The city itself — a gargantuan set built on Fox’s backlot, teeming with choreographed activity — is made to conform to a frightened rural couple’s perception of its size, noise, confusion and scale, and the Luna Park they visit in the evening is an even more delirious expressionist construction. Also striking is the embodiment of the couple’s enraptured state as they sail home across the lake, when a passing raft with silhouetted figures dancing around a bonfire captures their wild and exalted bliss, and the wife ecstatically rocks her head back and forth in time to the music. 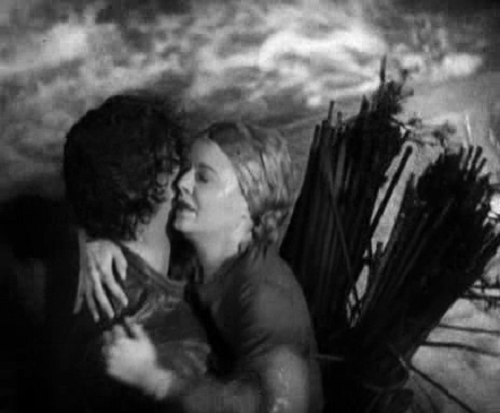 The storm scene before the boat overturns

Full of humor (slapstick sequences with a drunken piglet and a lady's shoulder straps have stood the test of time), Sunrise proves a testament not just to the power of cinema to make us laugh, cry and gasp, but also to the compassionate gaze of the camera lens as Murnau follows two humans who discover that the ups and downs of everyday life can’t tarnish the melodic perfection of true love. 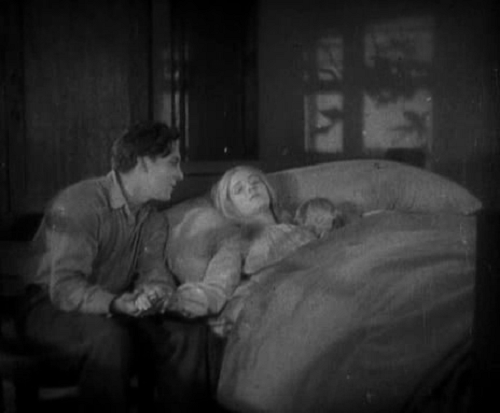 The man beside the woman after her rescue

Murnau’s richly imaginative and nuanced direction synthesizes performances, sets, camera movements and special effects (including many different kinds of superimposition) to spell them out. Early on, when the man walks across the meadow to meet the city woman in the marshes, the camera, in a startling effect, eerily takes on an independent intelligence: first following the man, then moving alongside him and finally rushing ahead of him to arrive at the city woman by a separate route, before he does. And her evocations of the city once they meet are sexually charged expressionist visions rendered through double exposures and camera gyrations, while the overlaps and distortions of the music convey the same cacophony. Even the text titled are integrated graphically in the visual design: the city woman’s line “Couldn’t she get drowned?” sinks and wavers like a body receding below a lake surface covered by mist — an effect complemented at the very end of the movie, when the watery, wavering title “Finis” stiffens from the heat of the rising sun. 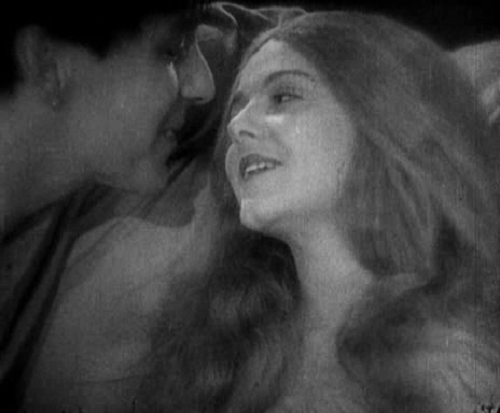 Reference:
Stuff of dreams by Jonathan Rosebaum that appeared in “The Guardian” on 31 January 2004