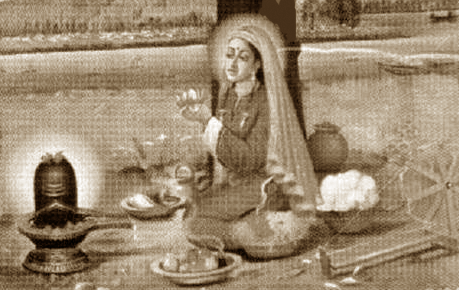 Kashmir has produced many saints, poets and mystics. Among them, Lal Ded is very prominent. There, some people consider her a poet, some consider her a holy woman and some consider her a sufi, a yogi, or a devotee of Shiva. Some even consider her an avatar, an incarnation of the Supreme Being. But every Kashmiri considers her a wise woman. Every one there has some sayings, called vaakhs of Lalla on the tip of the tongue.

Both Hindus and Muslims there affectionately call her "Mother Lalla" or "Granny Lalla". She is also called "Lallayogeshwari". Some people call her Lalla, the mystic.

It is said that Lal Ded was born in 1355 in Pandrethan to a Kashmiri Pandit family. Even as a child, Lalla was wise and religious-minded. When Lalla was twelve years old, she was married. Her in-laws lived in Pampur. Lalla would remain half fed, but would never complain about her mother-in-law. Her father-in-law was a good man and he was kind to her, but her mother-in-law made her miserable. She would even speak ill of Lalla to her husband.

When Lalla was twenty-six she renounced family and became a devotee of Shiva. Like a mad person, she would go around naked. She became a disciple of Sidh Srikanth. She would only keep the company of sadhus and peers. She did not think in terms of men and women. She would claim that she had yet to encounter a man, and that is why she went about naked. But when she saw Shah Hamdan, she hid her nakedness: "I saw a man, I saw a man."

Lalla, considered a divine person, was illiterate, but she was wise. Her sayings are full of wisdom. In these sayings, she dealt with everything from life, yoga, to dharma and atma to the Supreme Being. Her riddles are on the lips of every Kashmiri. People like Granny Lalla do not really die. Lal Ded is ever alive in her sayings and in the hearts of Kashmiris.

Kashmir has been the great invigorating force in areas of Aesthetics down the centuries in Aaryavarta that has now come to be called Bharat and India. The Laakshanikasiddhaanta treasures Kashmir contributed to literature in all our languages and strengthened the feeling our oneness and thus promoted unity in diversity. In the domain of Spirituality too Kashmir’s contribution has not been less inspiring. Lal Ded lived in mid 14th century. 1355 AD is the generally accepted year of her birth. Even the open-minded English scholars like Sir Richard Temple and Sir Richard Grierson were fascinated with Lal Ded’s vaakhs and besides their own studies, they got some researches initiated into Lal Ded. Several great Kashmiri scholars were roped in.

There is no authentic information on this great Shiva Yogini, the speaker of immortal vaakhs. Little is known as to when this sublime spiritual doyen attained siddhi, or merger with the Universal Spirit. Her vaakhs are aphoristic, telling, unsophisticated pieces of philosophical expression pregnant with spirituality. They are remembered throughout the land and used in everyday speech even today in Kashmir. She was also acclaimed as the one who had elevated the common man’s language to the level of edifying spiritual discourse.

Born into a devout family at Pandrethan, at twelve she was married and sent to her in-laws in Pampur, where as per custom she began to be called Padmavati. The mother-in-law was cruel and the young bahu was subjected to all kinds of harassment. But her own inner resources kept her going. Her guru Siddh Srikantha (whom she had known for several births by then) stood her in good stead. With her mind always on Parama Shiva, becoming an antarmukhi, turning the searchlight inward, seeking the inward, by stages she transcended her own guru. A number of legends, stories and anecdotes were woven round her and circulated widely in Kashmir. Divine powers were ascribed to her. Her vaakhs reveal the spiritual heights she had scaled.

Kashmir has produced many saints, poets and mystics. Among them, Lal Ded is very prominent. There, some people consider her a poet, some consider her a holy woman and some consider her a sufi, a yogi, or a devotee of Shiva. Some even consider her an avtar, an incarnation of God. But every Kashmiri considers her a wise woman. Every one has some sayings of Lalla on the tip of the tongue. Kashmiri language is full of her sayings.

There Hindus and Muslims affectionately call her "Mother Lalla" or "Granny Lalla". She is also called "Lallayogeshwari". Some people call her Lalla, the mystic.

Even as a child, Lalla was wise and religious-minded. When Lalla was twelve years old, she was married. Her in-laws lived in Pampur.. Her mother-in-law was very cruel. It is claimed that her mother-in-law used to put a stone on Lalla's plate (tha:l). She would then cover the stone with rice so that people would get the impression that Lalla had a plateful of rice. Lalla would remain half fed, but would never complain about her mother-in-law.

Here are a few of her ‘vaakhs’ in translation:

With a rope of loose-spun thread am I towing
my boat upon the sea.
Would that God heard my prayer
and brought me safe across!
Like water in cups of unbaked clay
I run to waste.
Would God I were to reach my home! (1)

Lalla compares Herself with an unbaked pot of clay. It has been on our tradition to compare man with a ghata, a pot. The unbaked pot slowly wastes away losing itself in material nature rather than being above it or in control of it. She pleads with God to see Her across the sea to Her real home.

A wooden bow and rush grass for an arrow:
A carpenter unskilled and a palace to build:
A shop unlocked in a busy bazaar:
A body uncleansed by waters holy-
Oh, dear ! Who knows what hath befallen me? (2)

The saint in Lalla bemoans her weakness and vulnerability, her inability to build herself into a strong being. A shop left helplessly open in the market place is an easy target for the wicked and unrighteous. Physical body is inlaid with all impurities, which need to be cleansed with the holy water of Divine grace.

By the highway I came,
But by the highway I return not.
And so I find me still on the embankment,
not having gone even half the way,
And the day is done, the light has failed.
I search my pockets but not a cowry find -
What shall I pay for the ferry fee? (3)

Slay the murderous demons,
Lust, Anger and Greed;
Or, aiming their arrows at you, they will
surely shoot you dead.
Take care, feed then on self-restraint
and discrimination of the Self:
Thus starved, these demons will become
powerless and weak. (37)

Coming into this world is not an act of individual volition. But having come, progress towards the unknown destination is hard without guidance. At dusk when nightfall is near at hand how can one cross over to the other shore? The ferryman needs to be paid and Lalla does not find even a cowry ( There is an idiom even in Hindi and Telugu pooti kaudi – broken cowry; – chilligavva – a cowry with a hole and so worthless)

For some reason I remember Kabir of the 14th Century whose thought processes too bring us all to the fore of ultimate reality, nullifying our self-esteem. To read these is to make ourselves wise and rid ourselves of our usual pride and passion.

(English translation of the vaakhs are by Jayalal Kaul in his book LAL DED published by Sahitya Akademi, New Delhi in 1973.)