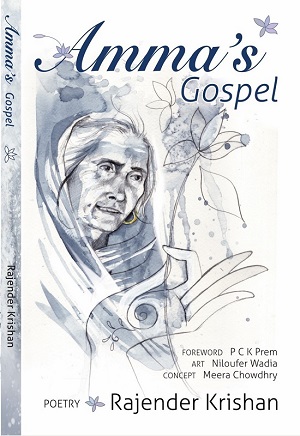 Prof Satya Chaitanya, in his excellent preview that faithfully mirrors the spirit of the poems in the book, rightly observes, “Amma who inspired these poems is an inheritor of the timeless wisdom of womanhood, the strength of eternal India and the compassion that flows out of our soul if only we can still for a few moments our minds, obsessed with chasing the world outside. Her wisdom could be found in every poem. It is not Amma teaching her grandson but the bygone ages imparting their wisdom to an age that has lost its touch with the wisdom of the Oversoul.” (159)

Let’s now hear from the horse’s mouth itself about the genesis of this book.

“As has been my wont, whenever I am confronted with dilemma, I end up invoking Amma (my paternal grandma – Shrimati Ratan Devi: 1900-1982). I invariably get answers to the questions and also her guidance to deal with the difficult situations in life.” Yes, it’s what the poet acknowledges in the Preface (31).

The intro to the book aptly says:

Mother is never an individual but a collective symbol of harmony and sorority. She is the quintessence of patience, tolerance and lover for humankind and perhaps, ultimately, stands before each one to say that to love man is to love ‘the self and humanity’ and thus, a restrained and yet so obvious yearning to establish peace and harmony in a not very healthy age. (About the Book)

‘Amma’s Gospel’ is not only a medium of illumination but also an expression of civilizational and cultural foundation the poet wishes to convey, and so builds up a lyrical edifice to confirm.’

As P C K Prem, in the Foreword, observes, “Amma exists in everyone whether visible or invisible as if she is the Supreme...”

Rajender Krishan’s Amma never claims omniscience, but her conscience being clear, her gospels instantly resonate with us.

Amma knew her limitations, often
admitting by saying “I don’t know”,
yet placing her hand on her chest
she would assert confidently:
“The One that is always with me
Have no doubt, That One Knows”
(Amma ji, p 37)

The same poem explains the difference between the two greetings – ‘Hi’ and ‘Namaste’. You do ‘Namaste’ – ‘With a smiling face | And folded hands’ (39), ‘Conveying gratitude | With a pleasing attitude’ (40) and it signifies an acknowledgment of the divine presence in one and all.

Many of the poems are in the form of brief questions (by the poet) and lucid answers (by Amma).

Love yourself
by being true to yourself
Be not in haste to react
First anticipate then contemplate
and
then respond
Follow the right path
Be happy
Be successful. (41)

All of us pray to God, with most of us seeking the fulfilment of our wishes, but we have to pragmatic to realize that –

You get what you deserve
Only when it becomes due
(Why Pray? – 50)

The origin, purpose, evolution and significance of ‘word’ that can capture or impregnate the entire universe has a spiritual purport in the Indic culture. And Panini’s Sanskrit grammar traces the origin of the Word and its syllables to the drum of Lord Shiva as he plays it.

Be it any word
its several layers
concealed within’
connect to other words
forever expanding
as the tree of life
(Word, 62)

Words matter a lot and there are whole courses and motivational talks on how to use them. A word can make or mar things. In the Indic culture, there are any number of personages embodying an ideal speech, like Rama and Hanuman. This idea is extended by another poem –<

One who knows how,
when and what to speak,
where and why to be quiet,
in all humility grows strong
to reign the wild horses
galloping in mind’s racecourse.
(Poise, 87) 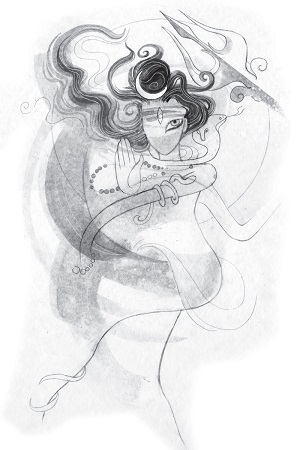 Going back to the belief that Lord Shiva is the originator of the word and that that the triphonic Aum aka Om is the primordial seminal sound out of which everything has emanated, let’s see how the poet interprets Him, a harmonious abode of apparent antinomies – of the Ganga in the tresses and the fire in the third eye; of the lunar nectar on the head and poison in the gullet; of ashes all over the body and companionship with ghosts; of the serpent as his necklace and the bull as his mount et al –

That the creation and existence are a mixture of opposites – call them positive or negative; plus or minus; light or shade; day or night; male or female – is further reinforced in another poem –

Love and hate
heaven and hell
joy and sorrow
birth and death...
as the obverse and reverse
of the same coin
(Nature, 113) 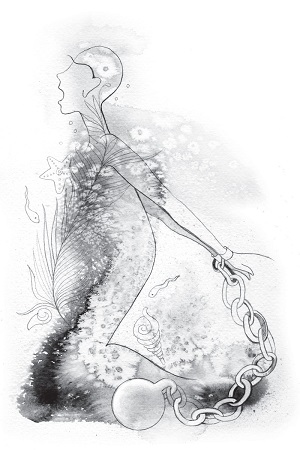 Even the Earth is a reflection of such diversity, if alone we can appreciate and see it in perspective –

But if this diversity is not properly appreciated as part of the same divine spectrum, and if it’s seen as hostile centrifugalism, it breeds malevolent and even genocidal proclivities, as history shows –

History is replete with brutal acts
exploiting the peculiarities with
prejudice, hate and manipulation
(Observation, 129)

Feel rich by sharing –
Life bequeaths aplenty
to the one full of caring
(Amma, 65)

Death is inevitable, so let’s “fear not Yama”, and this fearlessness and self-control we can cultivate by practicing Yoga as delineated by Patanjali. The Patanjali sutras (principles of Yoga) behove us to be “clean, committed, content, | honest, kind, loyal, non-violent, | persevering, poised and tolerant,” and not to be “a cheat, greedy or a thief” (Healing, 72). What else can be the best, clearest and easiest guide to the art or science of living! This practiced way of purposeful and virtuous living makes us equanimous and take life as it comes –

One, fearless of any loss
or worrisome of any gain
immerses in pure relaxation,
until the vacation is over
(Renunciation, 149)

In the above lines, ‘vacation’ symbolizes our terrestrial sojourn.

Where there is empathy and selfless love, there is ipso facto no room for arguments or being annoyed by them, as exemplified by Amma’s life –

To her the respect for
the precepts of dignity
was far more important
than winning an argument
(Esteem, 77)

All of us know that impulsive arguments smacking of polemical one-upmanship is divisive and conflict-breeding and not harmony-causing. You may win an argument with your opponent, but not his heart. The same point is touched upon in another poem too, where unlike a mystic, an –

Egoist must argue
ferociously to prove a point
(The Mystic, 115) 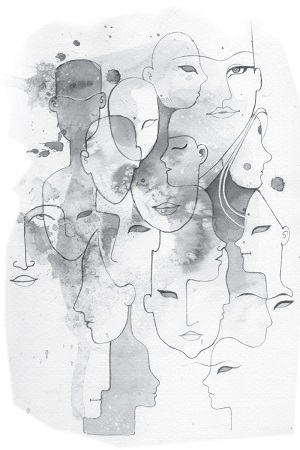 The Indian way of life accords a great value to the family bonds, for the virtues of understanding, adjustment and adaptability are learnt primarily in the alchemic lab of a family alone, but not in the nuclear and sub-nuclear families.

The folks rooted to
unity of family values
do understand that
the charity of kindness,
tolerance and love,
begins at home.
(Compassion, 81)

It’s not exclusively the wisdom from the mother that radiates from the poems in the book, as said earlier; there is also the paternal practical wisdom, where the father limits himself to advising his children only to choose the right means and right ends and leaves them the choice of the exact end.

Impose not on your children
your footprints, rules and criterion
simply lend them
a helping hand
(Destination, 83)

The font size in the book is convenient to the eye, and the pages are pleasantly interspersed with evocative illustrations by Niloufer Wadia reflecting the essence of the poems concerned.

As Sunil Sharma, another previewer observes, “After reading these poems, the reader feels fulfilled, elevated and revived!” (154)