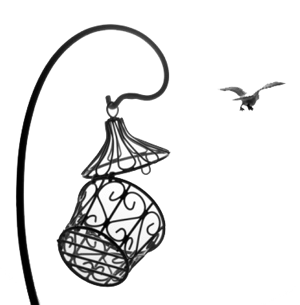 I know that people who have been following my columns carefully would be wondering why I haven't touched on free verse as yet. Surely, it is the easiest and most popular form of poetry and should have been among the first styles to find a place in such a series. The reason that I restrained is simply that I don't believe it is easier to write a great poem in free verse, it is tougher.

With out a proper rhyme scheme and meter, it is that much tougher to hold the viewer's attention glued to the poem. The words have to be powerful enough to make up for the absence of rhyme scheme and a proper form. Sure, the sheer lack of rule gives a writer more creative freedom and room to experiment, but the downside is the words are all you have to hold the attention of the reader. Your words have to be powerful enough to leap out from the page and weave images or emotions that enthrall the reader and keep him captivated. A free verse poem has minimal frills and fuss, it is stark words that portray the thoughts of the poet.

Before we explore the techniques of writing a free verse poem, lets delve a little into its meaning and history.

What is free verse?

Free verse - most common in the twentieth century, but by no means unique to it - has no fixed metrical foot, and often no fixed number of feet per verse. Free verse is sometimes called by its French name, vers libre. Free verse (or vers libre) is a style of poetry which is based on cadences that are more irregular than those of traditional poetic meter. While the basic rhythmic unit of most traditional poetic forms is the foot, free verse tends to use longer units, such as the line or stanza

Free verse may or may not use rhyme. When it is used, it tends to follow a looser pattern than would be expected in formal verse.

The practice of poets who write in free verse was well described by Ezra Pound, who wrote: "As regarding rhythm: to compose in the sequence of the musical phrase, not in sequence of a metronome." Pound's friend T. S. Eliot wrote: "No verse is free for the man who wants to do a good job."

As the name vers libre suggests, this technique of using more irregular cadences is often said to derive from the practices of 19th century French poets like Stephane Mallarme. However, in English it can be traced back at least as far as the King James Bible.

The poetry of the Bible, particularly in the King James Version, which attempts to approximate the Hebrew CADENCES, rests on CADENCE and PARALLELISM. The Psalms and The Song of Solomon are noted examples of free verse. Milton sometimes substituted rhythmically constructed VERSE paragraphs for metrically regular lines, notably in the Choruses of Samson Agonistes, as this example shows:

But patience is more oft the exercise
Of Saints, the trial of their fortitude,
Making them each his own Deliver,
And Victor over all
That tyranny or fortune can inflict.

Walt Whitman's Leaves of Grass was a major experiment in cadenced rather than metrical VERSIFICATION. The following lines are typical:

All truths wait in all things
They neither hasten their own delivery nor resist it,
They do not need the obstetric forceps of the surgeon.

Matthew Arnold sometimes used free verse, notably in "Dover Beach." But it was the French poets of the late nineteenth century --Rimbaud, Laforgue, Viele-Griffln, and others--who, in their revolt against the tyranny of strict French VERSIFICATION, established the Vers libre movement, from which the name free verse comes. In the twentieth century free verse has had widespread usage by most poets, of whom Rilke, St.-John Perse, T. S. Eliot, Ezra Pound, Carl Sandburg, and William Carlos Williams are representative. Such a list indicates the great variety of subject matter, effect and TONE that is possible in free verse, and shows that it is much less a rebellion against traditional English METRICS than a modification and extension of the resources of our language.

Many formalist poets find free verse to be aesthetically useless, or, at the least, less capable of expression. One such poet, Robert Frost, said that writing free verse was like "playing tennis without a net".

The Birth Of Free Verse

Walt Whitman is often celebrated as the first free verse poet in English. However, free verse in English has a longer history and possibly an even longer past. Kirby-Smith (The Origins of Free Verse. Henry Tompkins Kirby-Smith) goes at length to show examples of free verse predating Whitman, going back as far as Abraham Cowley (circa 1665) and including many other poets who lived and died long before Leaves of Grass.

This is not to discount the fact that during the 20th century, free verse came of age and became fashionable. If the 20th century is to be delineated in terms of its characteristic poetry, it would be known as the Age of Free Verse. Nor does Kirby-Smith deny this. Yet this should not get in the way of understanding its roots. Nor should it lead one to believe that free verse in former times was marginal and not influential until discovered by modern poets and scholars. John Milton, for example, wrote some free verse.

Unlocking the beauty of free verse

Many people consider free verse to be a modern form of poetry. The truth is that it has been around for several centuries; only in the 20th century did it become one of the most popular forms of poetry. Its popularity stems from the belief that free verse is poetry without rules; after all, it doesn't rhyme, and it doesn't have a meter. However, what separates poetry from prose is the arrangement of carefully chosen words into verses.

There's more to free verse than a sudden thought recorded on paper. It's not that no rules apply to free verse; rather, the poet makes up the rules for each poem! Free verse done well will have rhythm, though it may not have a regular beat. A variety of poetic devices may be woven throughout the piece. There may be patterns of sound and repetition. Free verse can be compared to a song that doesn't rhyme. There is still a lyric quality to it.

It may be more difficult to write free verse than any other form, simply because the poet has more decisions to make. With a haiku, you know the exact measurement of the poem; your task is easily defined. You need only follow the rules of the pattern. With free verse, there is no pattern until the poet creates one!

Without set rules, you are free to decide where to break your poem into stanzas. You may arrange your poem in stanzas of two or more lines. You may break at each new thought, much like paragraphs. You may break stanzas in mid-sentence to draw attention to a specific word or phrase.

I love this free verse by Walt Whitman. Walt Whitman was known for breaking his poems into stanzas at points where the reader might pause to take a breath. Such style takes great perception of the reader.

I Dream'd in a Dream
by Walt Whitman

I dream'd in a dream I saw a city invincible to the attacks of the
whole of the rest of the earth,
I dream'd that was the new city of Friends,
Nothing was greater there than the quality of robust love, it led the rest,
It was seen every hour in the actions of the men of that city,
And in all their looks and words.

This is one of the most metaphorical poems written by Whitman and experts are divided equally on whether it refers to an actual city or rather a friend's circle. Preferring a fanciful touch in a poem I like to think of it as the latter.

It sits looking
over harbor and city
on silent haunches
and then moves on.

This is probably a better example of free verse as the deviation from a proper form is clearly seen. Note the unequal size of the stanzas. Also note that there is no rhyming scheme and no meter followed.

The greatest challenge in writing free verse is to prevent it reading like prose. You need to suffuse an inner music into the words without use of rhymes. I would say the best way to write a free verse is to read many of them and observe the subtle techniques used by poets. Being the most popular poetic form(?) of the 21rst century, there is a wealth of information available everywhere on free verse.

I am personally a great fan of free verse and write most of my poetry in free verse, you are welcome to go through them and discuss any of them on the forum. I would encourage you to try free verse, it is like modern art, a little stark, a little abstract and utterly beautiful.

Comments on this Knowledge Zone