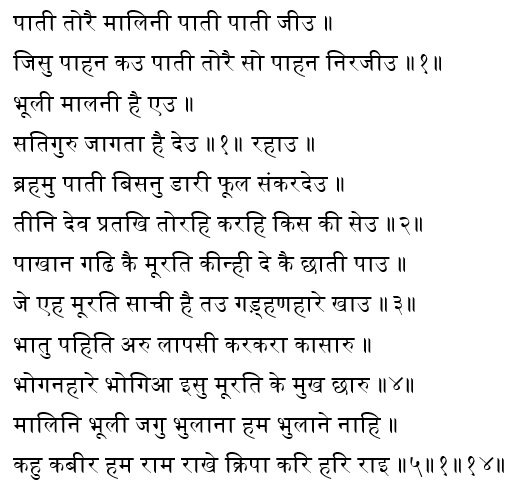 (To offer to the idol), the lady-gardener plucks off the leaves, flowers & petals, (but she does not know that) in every leaf, there is life. That stone (idol) for which she plucks off those leaves - is lifeless. 1. (By serving the lifeless idol) lady-gardener is mistaken, (real One needs to be worshipped) God is the Living One. 1. Pause. (O lady-gardener) the leaves are like Brahma, the branches are like Vishnu, and the flowers are like Shiva. When you openly destroyed these three gods, whose service are you performing (with your offerings)? 2. (The sculptor had) carved the stone and fashioned it into an idol, by placing his feet upon its chest (while carving). If this stone god was true (alive), it would have devoured the sculptor (for this insult). 3. Rice and beans, candies, cakes, and cookies - the priest enjoys these, while the mouth of the idol remains dry (because it is lifeless and cannot eat). 4. The lady-gardener is deluded, and the world is mistaken, but I am not. Says Kabir, God preserves me. God, my King, has showered His blessings upon me and has saved me from this delusion. 5. 1. 14.

The starting lines of verse are portrayal of an actual event witnessed by Kabir Ji. Kabir Ji saw a lady-gardener plucking leaves, petals etc. for the idols of gods as a devotional offering. Kabir Ji points the irony that she doesn’t realize, that every leaf being plucked is alive while the idols for which these are being picked are lifeless.

The essence of the whole shabad/verse is in the ‘Rahao’ line. The word ‘Rahao’ means to stop, take a pause to reflect on it. So, let us first try to understand what essential message is that Kabir Ji is trying to convey. He says that the lady-gardener is mistaken. Why? Kabir Ji says that God is the Living One, and He alone needs to be worshipped. To Kabir Ji the aliveness in the entire creation is God manifested.

Next, addressing the lady-gardener he clarifies that the leaves are the primary creation “Brahma” on the branches. The branches providing nourishment to the leaves are like god “Vishnu”. The flowers are like god “Shankar” also known as “Mahadev” or “Shiva”, as it comes last. In the process of gathering devotional offering for “Trimurti” the triad of three gods, those very gods have been sacrificed. Kabir is wondering who is being actually served? Kabir Ji says that there is a conundrum here, as life in three forms is being destroyed for the lifeless idols.

Addressing this conundrum, he asks if the statue was alive, why it did not devour the carver who was sitting on its chest while carving the face and the body with a chisel. The idol is without life; otherwise it would have retaliated for that type aggression. He adds that offerings of rice and beans, candies, cakes, and cookies are made to the idols, but actually the priest and his family relish those. While the mouth of the idol remains dry (being lifeless it cannot ingest any food or drink).

He concludes by saying that the lady-gardener is deluded, and so is the world, but (thank God!) I am not. Says Kabir, my God, and my King, has showered me with His blessings and has saved me from this delusion. God has preserved me by providing the correct understanding and wisdom that aliveness within is the God.

Kabir is trying to convey that God is alive, and is there forever. One who makes offerings to a lifeless idol is deluding oneself. Kabir Ji believed in the omnipresent, formless God; who cannot be reached through ritual offerings. But, in order to reach God Kabir says search within only. Here is his advice:

Translation: O human beings, search your own heart every day, and do not wander around in confusion.

The Rationale for the search:

Translation: The True Creator Lord is diffused into His creation; He is not just the idol of Shyam (dark-skinned Krishna of legends). 2.

According to Kabir, the God is merciful, one should make offerings, pray, and admire Him who is diffused everywhere in His Creation. Kabir himself did what he proposed and he experienced the transformation within. As a consequence of cleansing of his mind, God was following him and calling out his name. Kabir has shared about that experience in these words:

Translation: Kabir, my mind has become immaculate, like the waters of the Ganges.
Now God is running after me, calling out, "Kabir! Kabir!" 55.